Robert Burke was an Australian explorer.

Robert O'Hara Burke was a British soldier, police officer & a famous Australian explorer. He was the leader of the ill-fated Burke and Wills expedition, which was the first expedition to cross Australia from south to north, finding a route across the continent from the settled areas of Victoria to the Gulf of Carpentaria. 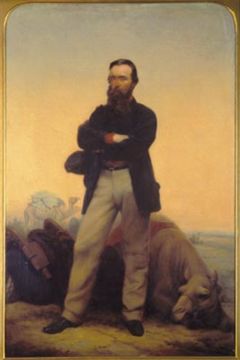 Robert Burke was born in 1821 St.Clerans, County Galway, Ireland. He was one of three sons born to Anne Louisa (nee O'Hara) & James Hardiman Burke, an officer in the British army, 7th Royal Fusiliers.

Robert was educated at Woolwich Academy. He joined the Austrian army where he served as Lieutenant in a cavalry regiment. In August 1842 he was promoted to Second Lieutenant in the Prince Regent's 7th Reuss Regiment of the Hungarian Hussars.

In June 1848 he was discharged at his own request & took up a command in the Royal Irish Constabulary Mounted for 5 years.

In 1853 he immigrated to Tasmania and shortly afterwards crossed to Melbourne, Australia where he joined the Victoria police as an acting inspector stationed at Carlsruhe. He was appointed senior inspector at Beechworth.

It was after the death of his brother James Thomas, in the Crimean War that Robert decided to enlist. He returned to England and applied for a commission in the army, in the hope of serving in the Crimean War. Before his case was fully considered, peace was signed, so he returned to Victoria, Australia and resumed his police duties. He returned to Beechworth and in 1858 became superintendent of police in the Castlemaine district.

In 1860 he was given leave to take command of the exploring expedition to cross the continent from south to north organized by the Royal Society of Victoria and supported by the government. In June 1860 he was appointed to lead the Victorian Exploring Expedition. William John Wills was the surveyor and astronomical observer.

The expedition left Melbourne, Australia on Monday 20 August 1860 with a total of 19 men, 27 camels and 23 horses. They reached Menindee N.S.W on 23 Sep 1860 where several people resigned, including the second-in-command, George James Landells and the medical officer, Dr. Hermann Beckle.

On 11 Nov 1860 the advance group reached Cooper Creek which was 400 miles away. The rest of the group were going to catch up. After a stop-over, on 16 Dec 1860 Burke decided to try and reach the Gulf of Carpentaria, leaving William Brahe in charge of the remaining party.

On 9 Feb 1861 Robert Burke, William Wills, John King and Charley Gray reached the Flinders River. (The Estuary of the Flinders River is near where the town of Normanton now stands). Flooding rains and swamps meant they never saw the ocean.

Wills' diary was found after his death and is held at the National Library Australia. He described a journey through rough terrain, tropical rains, hostile Aboriginals, shortage of rations and illness. He mentioned Gray's death on 17 April and the return to Cooper's Creek on 21 April, only to find that Brahe had left that morning for Menindee, leaving a small cache of supplies. They attempted to reach Mt Hopeless. Against Wills's personal judgment, the three survivors moved down to Cooper's Creek towards Adelaide. Had they followed the route back to Menindee, they could have met Brahe returning to look for them.

Wills was left in camp waiting for rescue, whilst Burke and King sought Aboriginals to get more supplies. When King returned to the camp he found Wills had died of exhaustion and starvation. Soon after, Burke also died at a place now called Burke's Waterhole on Cooper Creek in South Australia. The exact date of Burke's death is uncertain, but has generally been accepted to be 28 June 1861.

Alfred Howitt was an Australian anthropologist, explorer and naturalist who found King with friendly Aboriginals on 15 September & he buried Wills on 18 September. Later he returned the remains of Burke and Wills to Melbourne and they were given a public funeral on 21 January 1863.

Having successfully completed the south-north crossing, Stuart and his companions were received back at a large ceremony in Adelaide on 21 January 1863, the same day as the funeral of Burke and Wills.[1] 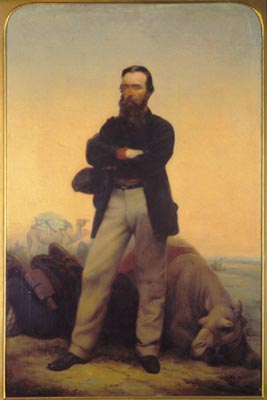 Robert is 23 degrees from Katie Goodwin, 22 degrees from Wilbur Scoville and 15 degrees from Henry VIII of England on our single family tree. Login to find your connection.