Wife of William Moseley — married about 1634 in Delft, Zuid-Holland, Netherlands

Susan (Burnet) Moseley was a US Southern Colonist.

Susannah was the daughter of Raph or Raphe Burnet and Magdalen Clark, christened December 7, 1595, in the parish church of St. Benet Fink in the City of London, England.[1]

It is clear that Susannah was a precocious young woman who appears to have worked closely with her father in the running of his business as a draper in the City of London. How do we know this? Because in her father's will, written on October 7, 1625, we find the following extraordinary statement at the very end:

"I do ordaine and appointe my daughter Susan Burnett to be ayding and assisting to my Executrix … of this my will. Witnessed my hand and Seale the day and year above written by me Raph [Burnett]."

In looking at literally hundreds if not thousands of early wills written in England and America between about 1600 and 1800, this is the only occasion on which this contributor has ever seen a specific and explicit instruction that a woman should aid and assist the named executrix (in this case her mother) in the execution of a will. It is an unusually clear (and maybe even unique) demonstration of the confidence held by her father in his daughter's capabilities as an administrator and businesswoman at a time when most women were -- sadly -- considered to have no significant capabilities in this area.

After the death of her father, in about 1626 or 1627, we know that Susannah was first married to Arthur Blackmore. We do not have any data about the date or place of that marriage. What we do know is that they were living in Delft, Zuid-Holland, by no later that 1628, and that they had just one child together -- Susannah Blackmore (later Moseley) Robinson Corker (c. 1628 - 1656/7) -- who appears to have been born in Delft and who was to die in Lower Norfolk, Virginia Colony.

Arthur Blackmore died in Delft between May 1632 and April 30, 1633, and Susannah married William Moseley -- almost certainly in Delft -- as her second husband between 1633 and late 1634, but we don't know exactly when.[2]. What we do know is that Susannah's former landlady, a widowed Mrs. Cornelius van Ring, brought suit against Susannah's new husband for the rent agreed upon by her late husband, Arthur Blackmore, for a house leased by Arthur Blackmore in Delft between May 1632 and April 30, 1633.[3]. This court case was heard on December 22, 1634, in the Hague (Den Haag), when the court ruled in favor of the widow Van Ring and against William Moseley.

Extraordinarily, we almost certainly know what Susannah Burnet(t) Blackmore Moseley looked like. What is believed to be her portrait -- probably painted some time between 1628 and 1635 in Delft, shortly after either her first or her second marriage -- was one of the four well-known family portraits that was handed down within the Moseley family for 220+ years from the time of her death in 1655 until 1879, when it was known to be in Philadelphia. A photograph of this portrait was taken some time between 1879 and about 1895, when the portrait was said to have been "deteriorating" in a basement in Norfolk, VA. A copy of that photograph is shown on this page. The current whereabouts of the original Dutch portrait -- if it still exists -- is unknown.

William Moseley and Susannah Burnet(t) Blackmore Moseley were the parents of:

It also appears that Susannah's second husband either formally or at least informally adopted Susannah's daughter by her first marriage because the twice-married Susanna Blackmore Moseley Robinson Corker is sometimes referred to by the Moseley surname in documents in Virginia.

The family had moved from Delft to Rotterdam by at least 1643 and perhaps as early as 1635.

In 1649, Susannah emigrated from Rotterdam to Lower Norfolk, Virginia Colony, with her second husband William, their three children, and six other named persons who were probably either financial dependents or servants.

The letter below is an exchange between Susannah and Col. Francis Yeardley (the third husband of Sarah Offley Thorowgood Gookin Yeardley) who was an important and close neighbor in Lynhaven Parish in 1650. It lays out the proposed details for the sale of cattle to the Moseleys in exchange for some jewelry Susannah had brought with her from The Netherlands to America.[4]

This letter again shows that Susannah was in no way shy about her ability to make business decisions in the absence of her husband and to act on them (not to mention her considerable skills as a communicator). The letter was also legally important because it was recognized by the courts in Virginia as demonstrating that a woman was legally empowered to make such an agreement (which Col. Yeardley and William Moseley subsequently confirmed in writing).

Susannah is mentioned in her husband William's will, when he left her

my grey mare and furniture, and I doe likewise give her one negro woman called Mary with her child Besse, to be at her disposing during her life. Alsoe doe I give my said wife Susan all the sheepe with the Increase thereof, together with all her wearing apparell and her Lifetime upon the plantation where she now lives.[5]

Susannah died a matter of at most a few weeks after her husband William, in July or early August 1655, apparently at the Greenwich estate in Lynhaven Parish, Lower Norfolk. She left no will, and her eldest son was appointed to administer her estate on August 15, 1655.

An inventory of her estate was recorded by her son William on February 15, 1655/56, and listed:

Our suspicion -- based, we hasten to add, on no other data at all -- is that the "two pictures" would have been the portraits of Susannah herself and her late second husband, William MOSELEY, photographs of which are shown with the profiles of Susannah and her second husband on the Wikitree web site.

Please note that many older source materials that relate to Susannah and her immediate family contain significant errors and need to be treated with great caution. They may include items that are factually accurate and others that are inaccurate. As an example, the 540 acre estate on which Susannah lived in Lower Norfolk was never known as "Rolleston". It actually became known, over time, as the Greenwich Plantation (but whether it was called that during Susannah's lifetime is unknown).

In sources of William Moseley her name is Spelt Burnett and Burnet.

Sponsored Search by Ancestry.com
DNA
No known carriers of Susan's DNA have taken a DNA test. 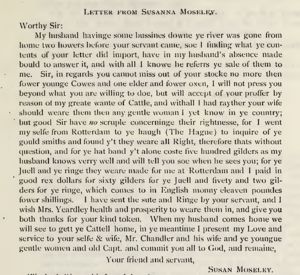 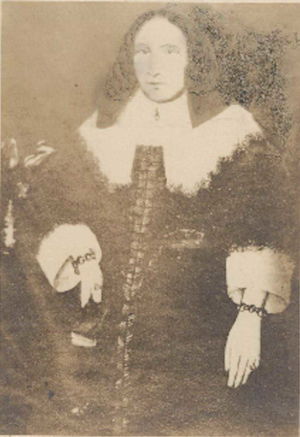 Liz (Noland) Shifflett
I proposed a merge of Burnett into Burnet. If you have documentation to show that her birth name was Burnett, please post to G2G to discuss (and postpone the merge, citing your source).

Susan is 16 degrees from Jaki Erdoes, 12 degrees from Wallis Windsor and 11 degrees from Henry VIII of England on our single family tree. Login to find your connection.