Robert Burns is Notable.
Robert Burns was a Scottish poet and lyricist. He is widely regarded as the Bard or national poet of Scotland.[1]

Robert Burns was born in a house his father built (now part of the Robert Burns Museum) in Alloway, South Ayrshire, Scotland, the eldest of the seven children of William Burns and Agnes Broun.[2][3][4][5] William was a tenant farmer and estate gardener from Dunnottar while Agnes was born in Moggsiel, Ayrshire, Scotland. Her father was also a tenant farmer.

When Robert was seven years old, his father sold his birth home and took possession of a 70 acre farm at Mount Oliphant.[6] Robert spent his youth there in poverty and had a very difficult childhood. All the manual labor Robert did on the farm led to health issues throughout his life as well as a stoop in his posture.

Robert attended an "adventure" school started by his father and several neighbors.[1] He went to a mathematics school in 1775 in Kirkoswald.[1] Robert's early love of literature often set him at odds with his tiny part of the world, which was so focused on agriculture.[1] It was only after his father's death that he felt free to pursue his love of writing.[1]

Robert loved women and had children with several during his life. Robert's first child was Elizabeth Paton Burns, born in 1785, from a relationship he had with one of his mother's servants, Elizabeth Paton.[7][8]

In March 1786, his second and third children, twins, were born of a relationship with Jean Armour. Robert signed a paper declaring his marriage to Jean, but her father destroyed the document and refused to acknowledge the venture.[1] To avoid dishonor and scandal, Jean's parents sent her to live with her uncle in Paisley. Despite her father's objections, Robert and Jean were married in 1788.[9] They had nine children but only three survived childhood.[10][11][12][13]

Being married did not stop Robert from pursuing other women, including but not limited to Margaret Campbell[14], May Cameron, Agnes McLehose[15], Jenny Clow[16], and Ann Park.

At first, Robert followed his paternal heritage in becoming a tenant farmer.[1] He started writing poetry, but to make sure he could stay away from the farm, worked to be an excise officer.[1] He started writing poetry and songs following the death of his father.[1] His first tome, "Poems, Chiefly in the Scottish Dialect", was printed in Kilmarnock in 1786 and paid for by subscriptions.[1]

Robert's poetry explored the worlds of farm life, Scotland's culture, religion, and his life experiences.[1] He began his writing career writing for his local audience, but started to reach out to the rest of his country and embrace his identity as a Scotsman.[1]

One reason Robert was lauded as Scotland's poet, apart from so many viewing him as the Scottish "every man", was because he marked the end of an era in which the poets of the country wrote in their ancient vernacular. The shift was eminent in Robert's time, toward the use of English, as is seen in his published works being in print in both languages.[1] Alternately, Robert's works mark the beginning of another era, his own poems often called "Pre-Romantic" for their sensitive focus on nature, high emotion, and backward seeking interest in legends and folk songs.[1] Some of his work even included the collecting and revising of those old tunes. One of his best known works, the poem "Auld Lang Syne", is often sung at Hogmanay, or New Year's Eve.[17] "Scots Wha Hae" served for a long time as an unofficial national anthem of Scotland. Other poems and songs of Burns that remain well known across the world today include "A Red, Red Rose", "A Man's A Man for A' That", "To a Louse","To a Mouse", "The Battle of Sherramuir","Tam o' Shanter", and "Ae Fond Kiss".

Robert Burns died in Dumfries on July 21st, 1796, of rheumatic fever (some note it was likely endocarditis).[1] He was only 37 years old.[18] On his deathbed, Robert spoke to his wife Jean, then to James Maclure, his attendant, telling him to "Be a good man; be virtuous; be religious. Nothing else will give you comfort when you come to be here."

Robert was buried in St. Michael's Churchyard, Dumfries, Dumfries and Galloway Scotland.[18] In September 1815, his body was transferred to the Burns Mausoleum, which was paid for with public subscriptions. It was erected in the southeast corner of the churchyard.[19][10] Jean Armour's remains were added to the mausoleum in 1834. At the same time, a cast was taken of Robert Burns's skull.[10]

Burns Suppers are held annually on or near Robert's birthday to pay tribute to the life, works, and spirit of the Scottish poet. The supper parties are most common in Scotland and Northern Ireland, with some celebrations in the United Kingdom and the United States as well. The gatherings may be formal or informal, but almost all include haggis and the drinking of Scotch whisky, as well as the reading of Burns's works.

A little-known fact is that President Abraham Lincoln, who himself penned a few verses, much admired the writings of Robert Burns. He attended the 1859 "Burns Nicht" [Night] celebration at Springfield's Concert Hall, marking the 100th anniversary of the birth of Scotland's Bard. One newspaper of the day reported that "The toasts offered on this occasion were most appropriate, and were responded to by some of the most talented men of the state, among whom were, Abraham Lincoln ..."[20]

(1) The book "No' Rabbie Burns: Poetry the Bard Would Not Have Put His Name To", by Stuart McLean, includes these examples ...

(2) The introduction to the book "Robert Burns: A Life", by Ian McIntyre, states in part ...

(3) The book "The G. Ross Roy Collection of Robert Burns", by Elizabeth A. Sudduth, includes these entries ... 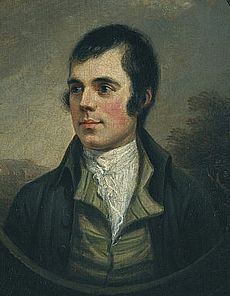 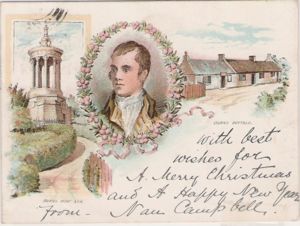 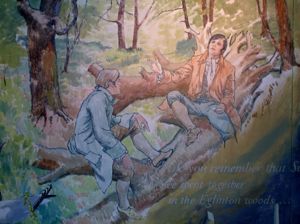 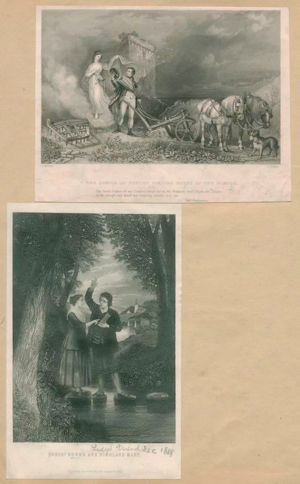 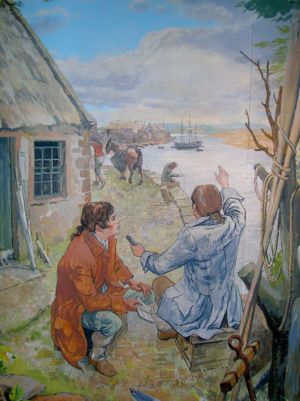 Elizabeth (Russell) Alderdice RGN SCM
this is Scotland's great poet ever and we still have every February have haggis neeps and tatties
posted on Burns-17678 (merged) Jun 14, 2022 by Elizabeth (Russell) Alderdice RGN SCM
Mike Jonas
I have attached a document to my grandmother, Doris Armour Aikman - Aikman-841 - showing links to Robert Burns. My 4G-Grandmother, Frances 'Fanny' Burns, appears to have been Robert Burns' first cousin, and her husband my 4G-Grandfather Adam Armour was brother of Robert Burns' wife Jean Armour (the links in the ancestry charts show incorrectly, with each child attached to one parent instead of both, but it shouldn't be too difficult to interpret correctly).

There's also some information about Robert Burns which I think is not in the Wikitree page (or I missed it), eg. the story of the Inveraray Punch Bowl, now in the British Museum. Whether the information is worth adding or is solid enough for Wikitree is your decision.

Judith Robinson
Burns was contemporary to my Scottish Poet ancestor James Grahame 1765-1811 (Grahame-52) and I believe from the diaries and letters of his grandson Will, that he and Burns knew each other. In fact Grahame wrote a poem about Burns: [1]
posted Nov 30, 2018 by Judith Robinson

O, what a panic's in thy breastie!

To the master of the Wikitree, Ms. Terry Wright who I see is quietly polishing another of her masterpieces.