Lucy Burns was a part of the Suffragette Movement.

Lucy Burns (July 28, 1879 – December 22, 1966) was an American suffragist and women's rights advocate. She was a passionate activist in the United States and in the United Kingdom. Burns was a close friend of Alice Paul, and together they ultimately formed the National Woman's Party.

Raised in a close-knit, Irish Catholic family, Burns was fortunate in having a father who believed in education for women and had the means as a bank vice president to provide it. His five daughters attended Packer Collegiate Institute in Brooklyn Heights, the best girls' school in Brooklyn's best neighborhood. Tall and sturdy, with blazing red hair, blue eyes, and dimples, Burns was a proficient debater known for her robust sense of humor. 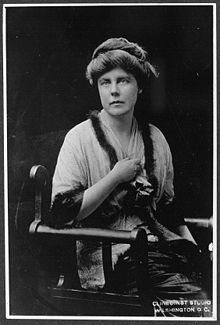