William was an American novelist, short story writer, and essayist. He was the younger of two sons born to Mortimer Perry Burroughs and Laura Hammon Lee. He frequently wrote under the pen name William Lee. Though he graduated from Harvard, he never held a steady job, and subsisted primarily on an allowance from his wealthy parents. Negative events in his life, such as his heroin addiction and the accidental shooting of his wife, inspired his writing.

He was associated in New York with other characters of the Beat generation such as Jack Kerouac, Allen Ginsberg and Neal Cassady. He lived for a time in Tangier with Paul Bowles and Brion Gysin.

Finding success with his confessional first novel, Junkie in 1953, he is perhaps best known for his third novel Naked Lunch in 1959, a controversial and fraught work that underwent a court case under the U.S. sodomy laws. With Brion Gysin, he also popularized the literary cut-up technique in works such as The Nova Trilogy. In 1983, William was elected to the American Academy and Institute of Arts and Letters, and in 1984 was awarded the Ordre des Arts et des Lettres by France. William would face family tragedy again as his only child, William Seward Burroughs III, also a writer, succumbed to substance addiction and died from alcohol-related trauma in 1981. William died at his home In Kansas at the age of 83.[1] He is buried at Bellefontaine Cemetery in Saint Louis, Missouri.

His paternal grandfather invented the adding machine which was a precursor to the computer. 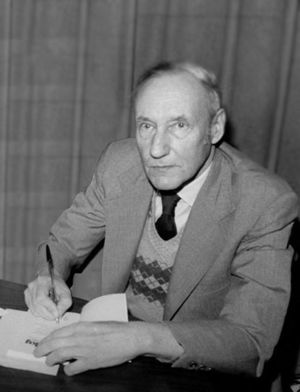