2. Court Appearance; 24 Mar 1654/55; Springfield, Hamden, Massachusetts 5. Brought charges against Samuel Wright Jr. as the father of her child. Samuel was found guilty & ordered to pay for the child's upkeep and to receive '12 lashes on his naked body'. Mary received the same 12 lashes and 12 more for 'Comitting wickedness with Joseph Bonde". She received the first 12 and paid a fine of 30s to redeeme the second 12. Samuel Wright Jr. was the husband of her sister, Elizabeth Burt.

Images: 1
Mary Burt being led to her whipping 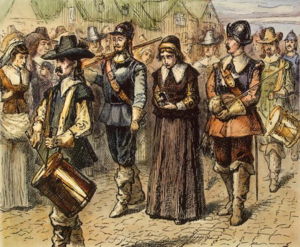 Jerry Smith
Burt-1 and Burt-1586 appear to represent the same person because: After looking at Mary Burt-1 profile I saw the biography was wrong - it was that of her sister, Mercy who was married to Judah Wight.

Mary Burt-1586, (please compare profiles) and Mary Brooks Burt are the same person. This is not the Mary Burt Brooks-1859 mentioned in the comments with birth dates are 20 years different. They are not mother and daughter. Thank you for reviewing this merge. Jerry

posted May 26, 2015 by Jerry Smith
Ed Poor
Burt-1 and Burt-1586 do not represent the same person because: Wasted a lot of time but found the obvious mistake. They are mother and daughter
posted May 25, 2015 by Ed Poor

Tami Osmer
I don't know that I would have agreed to the merge of Brooks-1859 and Burt-1 given that their birth dates were 20 years different.
posted May 24, 2015 by Tami Osmer

Jerry Smith
Burt-1586 and Burt-1 appear to represent the same person because: same person
posted May 14, 2015 by Jerry Smith