Elizabeth was born in 1638. She is the daughter of Henry Burt and Eulilah Marche. She passed away about 1690.

Excerpt from Genealogical and personal memoirs relating to the families of Boston and eastern Massachusetts by Cutter, William Richard, 1847-1918 [1] 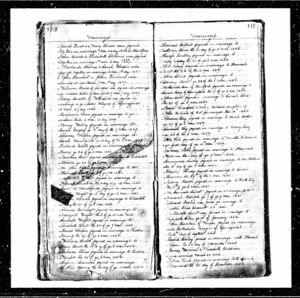 Bob Fields
Burt-3786 and Burt-16 appear to represent the same person because: Dates and locations all match exactly. Burt-3786 never should have been created, has no sources (ancestry.com). 3 duplicate father generations (Henry Burt) also need to be merged. Duplicate husband needs to be merged. Any conflicting information, please defer to Burt-16.
posted May 22, 2019 by Bob Fields

Elizabeth is 15 degrees from Danielle Liard, 11 degrees from Jack London and 12 degrees from Henry VIII of England on our single family tree. Login to find your connection.