Edward Burton was born in England.

His probable grandfather “Sir Edward Burton for his services to the House of York in 14 battles, had the singular honour of Knight banneret conferred upon him by Edward IV. In 1460 after the battle of St Albans. Sir Edward settled at Longner co Salop and from him descended his son, Sir Robert Burton, knt, had the first grant of arms May 23 1478; his son Edward m. Jocosa Coyney; he d. 1524; their eldest son John m. Elizabeth Poyner, and d.1543; Edward his eldest son m Anne Madock; he d. 1558 …”[1].

The Visitation of Shropshire 1623 includes a Pedigree for "Burton of Longnor, in the parish of St. Chad, Shrewsbury"[2]. The Pedigree begins with Edward Burton who it stated was "made a Knight Bannerett in 1460 and was Grome of the Stoole to Henry VII" (25-40 years later?). The Pedigree claims that he married Jocosa (Joyce) daughter of Thomas Cressett of Upton, Cressett, Shropshire. The only child of Edward and Jocosa that was recorded in the Pedigree was a John Burton who married Elizabeth, daughter of Thomas Poynar of Beslow, Shropshire. However, the will of Edward Burton in 1524 and his monument (see below) both suggest that the Burton Pedigree in the Visitation of Shropshire was incorrect in ascribing Knight Bannerett in 1460 to the Edward Burton who begins the Pedigree, that attribution probably applied to his grandfather. As for the attribution of Groom of the Stole, it is unclear if it applies to this Edward or not. In Burke[3] it was stated that "some pedigrees and records style him Sir Edward Burton Knight and some groom of the Stole to Henry VII". Burke didn't state which records and seemed to be sceptical of both attributions.

An Edward Burton "grome des Robes H.7." was noted in the Gardiner Pedigree in the Visitation of Shropshire[4]. The Pedigree indicated that he had married Jocosa Cressett, daughter of Robert Cressett, and they had two sons, Thomas and John. Is it possible there are two different Edward Burton families which have become confused, or that Joyce Cresset was the wife of the grandfather of this Edward Burton?

In the will of Edward Burton in 1524 (see below) his wife was named as Joys.

She would appear to be the Joyce who was previously married to a Ralph Lane (c1443-1477) of Hyde, Staffordshire. In the Inquisition Post Mortem for Ralph Lane on 01 Sep 1477 it stated that his wife was Joyce and that the son and heir of Ralph was Richard Lane aged 4[5]. In 1481 "Richard Lane [in this case the brother of Ralph] executor of the will of Ralph Lane late of Hyde, co. Stafford, and Edward Burton and Joyce co-executrix of the said Richard, sued William Barbour for a debt of £20. In the will of Richard Lane, son of Joyce, made on 14 Apr 1513 he stated that his mother Joyce held for her life his lands at Bentley, Coven, Gunston and Bromhalle, all in Staffordshire. He also stated that his mother Joyce was to have and enjoy all lands and tenements appointed to her in her jointure and dower. His Inquisition Post Mortem on 15 Jun 1516 referred to one third of the Manor of Bentley which was held by Edward Burton and Joyce his wife as part of her dower the reversion belonging to Richard Lane and his heirs, and also lands in Hyde, Stratton and Brewode, held by Edward Burton and Joyce his wife as the reasonable dower of Joyce, with reversion to Richard Lane[5].

Joyce has been suggested in various Pedigrees to be a Griffin, a Cressett and a Coyney. On balance, the most plausible evidence is that of the arms on the Monument now at Atcham, Shropshire, indicating that she was a Coyney. See her profile for further details.

The will of this Edward Burton in 1524 (see below) referred to his wife, Joys; three daughters namely Anne, Jone Corbet and Elyn Banister; and a son and heir, John Burton. The will also noted a Mary Barker and a Dorathe Barker but did not specify their relationship to the Testator. They may or may not also have been daughters.

The Burton Pedigree in the Visitation of Shropshire[2] indicated that Jane Corbet and Ellena Banester were daughters of John Burton and Elizabeth Poyner i.e. they were granddaughters of Edward Burton.

The Barker Pedigree in Miscellanea Genealogica et Heraldica[8] suggested that a Joyce Burton, indicated to be a daughter of Edward Burton of Longnor, married John Barker alias Calverahll of Colchurst near Market Drayton. The Pedigree didn't specify which Edward Burton was her father.

With regard to the church of St Eata, Atcham, Shropshire: “The only monument of note is that of Jocosa Burton, an incised slab brought from Old St. Chad’s, Shrewsbury, and dated 1524"[9].

The inscription on the monument reads[10]:

An attempted partial translation is:

Here lie the bodies of Edward Burton and Joyce his wife which Edward died on the feast of St George 23 Apr AD 1524 and Joyce died on [gap] the month of [gap] AD 15 [gap]. i.e. her dates were not entered and indicating she died after her husband (as supported by his will, see below).

The arms over the figure of Edward Burton: per pale, B. and G. a cross engrailed O. between 4 roses A. [Burton].

The arms over the figure of Joyce: O. on a bend S. 3 trefoils slipped A., impaling A. a lion rampant S. [suggested to be those of Coyney, of Weston Coyney, Staffs and Stapleton of Stapleton in Shropshire].

Summary of the Will of Edward Burton 1524

In his will made on 20 Apr 1524 and proved on 14 Oct 1524 he was recorded as "Edward Burton of Longnor within the Countie of Salop gentilman"[11]. His will was to be buried in the "chapel of St George in the church of Saint Chadde of Salop".

He made bequests to:

The residue of his goods etc he bequeathed to his wife Joys and his son and heir John Burton whom he made his Executors. His Overseers were Master John Salter and Sir William Lynyall.

For a full Transcript of the will see Miscellanea Genealogica et Heraldica[12]. 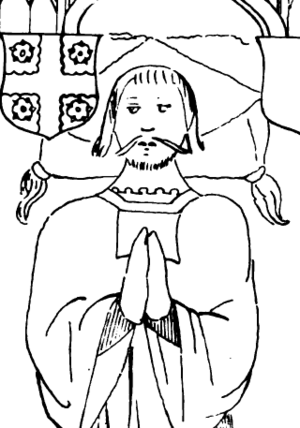 Fann Fann
I've updated what I had originally posted from "The Barkers of Aston," which affects this profile and the de-duplication. Thanks.
posted Oct 28, 2018 by Fann Fann

Jack Day
The biography needs to be researched in its present form before one knows enough about the two profiles to know if they should be merged!
posted Sep 29, 2018 by Jack Day

Fann Fann
Regarding the death date, Familypedia cites, as follows:

Fann Fann
Burton-1614 and Burton-320 appear to represent the same person because: the evidence points to this being a duplicate, despite some adjustments in dates. Burton-320 previously had essentially no sourcing, but three have been added to the profile comments (I don't have pre-1500 certification). Also some duplication will result from the merge, as frequently is the case, but in other cases, connections to ancestors and descendants will emerge from the alignment and realignment. I anticipate completing my pre-1500 certification before the end of October and will gladly volunteer to assist with the profile after that, but for now, please let me know if I may provide any other assistance. The WikiTree+ comparison shows how the children, especially, benefit from reconciling these "About" dates.

Thank you for reviewing this merge.

"John Barker alias Coverall of Colchurst = Joyce, dau. of Edw. Burton of Longmor, co. Salop. Groom of the Stole to Hen. VII. She probably died before 1524."

Along with previously described references, these are "as cited" references for follow-up, and at present, I have no access to pre-1500 profiles to add them.

Note also that the daughter Joyce Burton already exists on WikiTree as Burton-1613 - however, the father for her is a duplicate of this profile.

Fann Fann
Sir Edward Burton of Longnor in Shropshire Groom of the King's Close Stool to Henry VII is briefly discussed in Wikipedia: Groom of the Stool:

"Grooms of the Stool under Henry VII:" Sir Edward Burton (d. 23 Apr 1524) of Longnor, Shropshire, father of Sir John Burton, Groom of the Stool to King Henry VIII, citing: "Burke, John, "A Genealogical and Heraldic History of the Commoners of Great Britain and Ireland, Enjoying Territorial Possessions Or High Official Rank: But Univested with Heritable Honours", 1838. A genealogy of the Burton family of Shropshire by Burke's Peerage."