James Butler was a member of the aristocracy in England.

James Butler, 12th Earl and 1st Duke of Ormonde, was born in 1610. He gained his first title as Viscount Thurles when his father drowned at sea in 1619.

They had five sons and three daughters, 5 of which survived to adulthood.

Their fifth son Richard, born 15 June, 1639, died in London January 1685/6 was created Baron Butler of Cloughgrenan, Viscount Tullogh and Earl of Arran on 13 May 1662, and on 27 August 1673 he was created Baron Butler of Weston co Huntingdon.[1] He married 1) Mary, Baroness Clyfton de Layton Bromswold, baptized 10 July 1651, sister and heir of Esme, Duke of Richmond, and daughter of James Stuart, Duke of Richmond and Duke of Lennox, and Mary, the daughter of George Villiers, Duke of Buckingham, and 2) Dorothy, daughter of John Ferrers, of Tamworth Castle and Anne the daughter of Sir Dudley Carleton,[1]

They also had a younger son, John Butler.[1]

The following description of the duke is extracted, verbatim, from the biography "The Life of James, Duke of Ormond", written by English historian Thomas Carte (1686-1754):[4]

The Duke of Ormond is one of the historical figures profiled in the documentary "Cromwell: God's Executioner".[5] 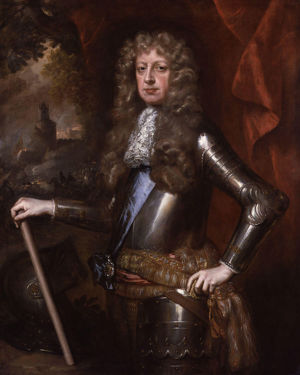 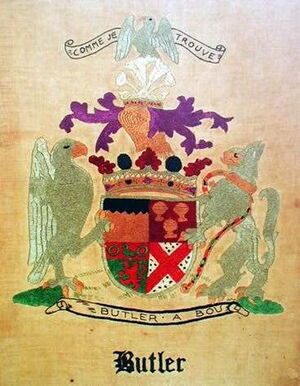