Butler was born 22 June 22 1947 in Pasadena, California to Laurice and Octavia Margaret (Guy) Butler.[1][2][3] Butler was her parents' first living child of five pregnancies; she stated in interview, "I had four brothers who were born and died before I was born. Some of them didn't come to term, some of them did come to term and then died. But my mother couldn't carry a child to term, for the most part something went wrong."[4] Butler died 24 February 2006 in Lake Forest Park, Washington.[5][6][7][8]

Butler was raised as a Baptist.[9] Later in her life, she identified herself as a former Baptist.[10]

Octavia Butler was an African American writer of science fiction. The winner of multiple Hugo and Nebula awards, she was the first science fiction writer to receive the Genius Grant (more formally called the MacArthur Fellowship).[11] Her works explored the nature of being human, through the lenses of race, community membership, and religion. Biography states, "For some writers, science fiction serves as means to delve into fantasy. But for Butler, it largely served as a vehicle to address issues facing humanity. It was this passionate interest in the human experience that imbued her work with a certain depth and complexity."[12]

Of Butler's many books, one in particular may be of interest to genealogists. That book is Kindred, one of her most popular books, in which a young black woman goes back in time to save the life of one of her ancestors, who was a white slave owner. When asked why the book is so popular, she said:

Because it's accessible to a number of audience[s]: black studies, oh, I guess I have to modify my vocabulary here -- African American studies, women's studies and science fiction. It sometimes reaches people who might not otherwise read that kind of book, who might not read a history, a historical novel even about that period unless it was a Gone With the Wind type.[13]

She went on to discus her reasons for writing the book:

But a lot of my reason for writing it came when I was in preschool, when my mother used to take me to work with her.

I got to see her not hearing insults and going in back doors, and even though I was a little kid, I realized it was humiliating. I knew something was wrong, it was unpleasant, it was bad. I remember saying to her a little later, at seven or eight, "I'll never do what you do, what you do is terrible." And she just got this sad look on her face and didn't say anything. I think it was the look and the memory of the indignities she endured. I just remembered that and wanted to convey that people who underwent all this were not cowards, were not people who were just too pathetic to protect themselves, but were heroes because they were using what they had to help their kids get a little further. She knew what it was to be hungry, she was a young woman during the Depression; she was taken out of school when she was ten. There were times when there was no food, there were times when they were scrambling to put a roof over their heads. I never had to worry about any of that. We never went hungry, we never went homeless. I got to go to college and she didn't even get to finish elementary school. All that because she was willing to put up with this nonsense and try to help me. I wanted to convey some of that and not have it look as though these people were deficient because they weren't fighting. They were fighting, they just weren't fighting with fists, which is sometimes easy and pointless. The quick and dirty solution is often the one that's most admired until you have to live with the results.

Butler left behind a large collection of papers, including unpublished stories. The collection is housed at the Huntington Library in San Marino, California. The finding aid to the collection is, according to Gerry Canavan, over 500 pages, which gives a hint about the size of the collection.[14] 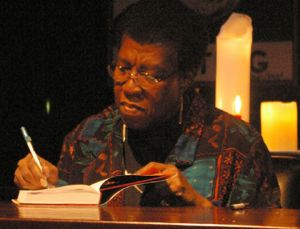