William was the first son of 9 children born to Nicholas Cabell & Rachel Hooper. His father Nicholas was a wool-stapler & English gentleman belonging to the Cabells of Devon and Somersets hire, whose estates were confiscated, either wholly or in part, because of their allegiance to Cromwell.

He graduated from the London College of Surgery and Medicine.

About 1723 he resigned his commission as a surgeon in the British navy.

1723/09 He left England, sailing from Bristol to Virginia.

He married Elizabeth Burks (daughter of Samuel King Burks & Mary Elizabeth Davis) & they settled near Dover on land that Elizabeth's father acquired prior to 1716.

He first appeared in "New World" documentation as a witness to a land sale in Henrico County, Virginia along with his first cousin, William Mayo.

In 1726 he was appointed under-sheriff of Henrico Co, VA.

In 1728 Goochland County, VA was formed & he was appointed one of its first justices.

In 1730 he became an active land surveyor, working along the upper James River.

In March 1735 he was granted a land patent for 1200 acres along Licking Hole Creek in Goochland County, VA.

In 1735 he was called to England by the death of his father & needing to settle affairs. He left his wife in charge of the Virginia property with a Power of Attorney ...

"I, William Cabell of the County of Goochland do appoint my loving wife Elizabeth Cabbell and my loving Friends William Mayo and George Carrington to be my Lawfull Attorneys in Virginia for me and in my Name to Use to receive any sums of money that shall be owing unto me, to prosecute and defend suits in Law or Equity, imprison or discharge or do any other Act or Deed which I could lawfully do were I present - ratifying and holding firm, all whatsoever my said Attorneys or either of them shall lawfully do or cause to be done in or about the premises. Witness my hand and seal this 27th August 1735. William Cabbell [Seal].

After a 6 year absence, in 1742 he returned to Virginia, where he resumed increasing his holdings and moved his family up the James River to his 4800 acre land patent in what is now Nelson County, VA. He named the new town "Warminster" after the English town of his youth.

In 1745 Albemarle County, VA was established & at its first court hearing he served as a justice.

He promoted immigration & his responsibilities to the county included collecting tithes, providing security for the Sheriff & Charles Lynch's ferry across the Rivanna River, serving as coroner & working as assistant surveyor.

He served as a Captain in the Indian Wars of 1745.

In 1748 he began operating his own ferry across the James River and obtained a license for a tavern. Additionally, he spent considerable time and energy on surveying the surrounding wilderness.

He had a successful practice as a doctor and surgeon. He purchased and made medicines, sold wooden limbs, established a private hospital near his residence & made professional visits far and near.

On 27 Sep 1762 he remarried to Mrs. Margaret Meredith (the widow of Samuel Meredith from Hanover County, VA).

He was a doctor, surveyor, magistrate, farmer, trader, vestryman, churchwarden & pioneer in early Virginia who had an enormous impact on the formation of the colony.

Thank you to Ed Burke for creating WikiTree profile Cabell-39 through the import of Burke Brooks Tree 2010.ged on Feb 18, 2013.

Click to the Changes page for the details of edits by Ed and others.

More records on William Cabell M.D. may be available offline. Schedule a free consultation with our friends at Trace. 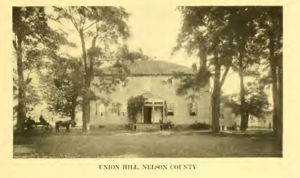 William is 15 degrees from Alice Paul, 19 degrees from Michael Schell and 12 degrees from Henry VIII of England on our single family tree. Login to find your connection.