Hywell was the youngest son of Cadell, himself the son of Rhodri the Great.

Hywel Dda (English: Hywel the Good) or Hywel ap Cadell (c.880 – 950) was a King of Deheubarth who eventually came to rule most of Wales. He became the sole king of Seisyllwg in 920 and shortly thereafter established Deheubarth, and proceeded to gain control over the entire country from Prestatyn to Pembroke. As a descendant of Rhodri Mawr through his father Cadell, Hywel was a member of the Dinefwr branch of the dynasty. He was recorded as King of the Britons in the Annales Cambriae and the Annals of Ulster.[8]

Hywel was a well thought of King of Deheubarth in south-west Wales who came to rule Wales from Preststyn to Pembroke. A descendent Of Rhodri Mawrthrough thru his father Cadell, Hywel was a member of the Dinefwr branch of the dynasty.

He is remembered as one of the most responsible Welsh rulers of all time. His name is particularly linked with the development of the Welsh laws, generally known as the 'Laws of Hywell Dda'.

A well educated man by our standard's having a good knowledge of Welsh, Latin, and English.

Hywell achieved an understanding with Athelstan of England where they both ruled a part of Wales jointly. Hywel minted his own coinage in the English City of Chester. He was the first Welsh ruler to produce coinage for at least a thousand years.

His study of legal systems and his pilgrimage to Rome in 928 combined to enable him to formulate advance ideas about law.

The Hywel "Law" book was written partially in Latin, about laws at court, law of country, and law of justices.

948.
And Howel the Good, son of king Cadell, chief and glory of all the Britons, died. And Cadwgan, son of Owain, was killed by the Saxons. And then the action of Carno took place between the sons of Owain, son of Howel, and the sons of Idwal.[9]

Cawley reports that Hywel & his wife had four children. [10]

Boyer lists nine children, identifying which are listed by Bartrum and which by Bridgeman. The list below follows the order in Boyer. Dates currently listed in Wikitree but without source are identified. [11]

Listed by Bridgeman but not by Bartrum

An additional child (Merion Blaidd (Gest) Rhudd born 968) [11] was not listed by any source and was de-linked. 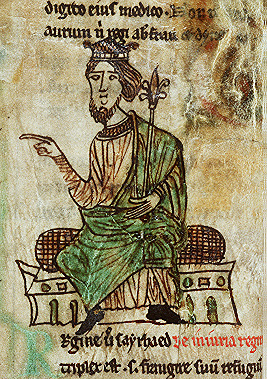 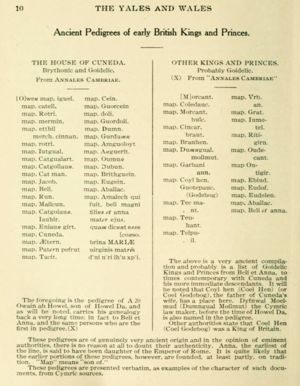 Hywel Dda is 28 degrees from Jaki Erdoes, 27 degrees from Wallis Windsor and 15 degrees from Henry VIII of England on our single family tree. Login to find your connection.