NASA ASTRONAUT FERNANDO "FRANK" CALDEIRO of League City, Texas passed away on October 3, 2009 after a valiant two and a half year battle with brain cancer.

He is survived by his wife Donna; daughters Annie and Michelle; his mother Mrs. Carmen Caldeiro; sister Mrs. Anna Badillo; brother in-law Nelson Badillo and nieces Sarah and Catherine Badillo. Frank was Argentina's first Astronaut, and a member of the 16th class of Astronauts, "The Sardines."

He was born in Buenos Aires, Argentina on June 12, 1958 and in 1974 he immigrated to the United States and settled in Flushing, New York. When he arrived in the United States Frank spoke no English. A classic American success story of hard work, he not only learned English, he earned his Associate's Degree in Applied Science from the State University of New York, Farmingdale in 1978. He then earned his Bachelor of Science in Mechanical Engineering from the Arizona State University in Tempe, Arizona in 1984 and a Master of Science in Engineering Management from the University of Central Florida in 1995. Frank earned many awards and recognition over the years, having worked on the B-1 bomber with the Rockwell Corporation and with NASA on the Space Shuttle and Space Station Programs. Two of his proudest achievements were serving on the President's Advisory Commission on Educational Excellence for Hispanic Americans in 2002 and receiving the Hispanic Scientist of the Year Award in the same year. In addition to his many contributions to the nation's space program, he was proud to be a member of the Aircraft Owners and Pilot's Association, the Experimental Aircraft Association and National Rifle Association.

Undoubtedly his greatest satisfaction came from being a devoted husband, father, son, brother and friend. These are his greatest legacies and are the reasons why his family and friends recall him as a giant of man.

This Tuesday, October 6th at Saint Mary's Catholic Church at 1612 East Walker Street in League City, Texas will be a Visitation from 5-6 PM. This will be followed by a funeral Mass at 6PM.[2]

Is Fernando your relative? Please don't go away!

ask our community of genealogists a question.
Sponsored Search by Ancestry.com
DNA
No known carriers of Fernando's ancestors' DNA have taken a DNA test. 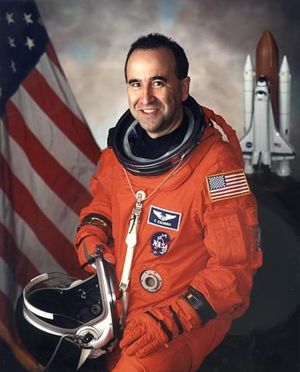