Sir John Call Bart. (1731-1801) was the son of John Call and Jane Mill
He was educated at Blundell's School (Tiverton, Devon) and went to India c. 1749 at the age of 18 with Benjamin Robins, the chief engineer and captain-general of artillery in the East India Company's settlements.
In 1757 he was raised to the rank of Colonel and cheif engineer in the East IndiaI Company (EIC).
The following year the EIC appionted him to a seat on the Council of Fort St. George.
Robert Clive strongly recommended Call for the Governorship of Madras, but in 1770 he resigned his position with the EIC and returned to England.
He was High Sheriff of Cornwall for 1771–72 and was elected MP for Callington in 1784, a seat he held until his death. In 1784
In March 1772 he married Philadelphia, third daughter and co-hieress of Dr. William Batty of Great Russell Street, London.
He was appointed Fellow, Antiquarian Society (F.A.S.) He was appointed Fellow, Royal Society (F.R.S.).
He died aged ~ 70y in 1801 of an apoplectic fit at his house in Old Burlington Street, London and was buried at St Margaret's old churchyard, Lee, Kent (now in the borough of Lewisham), where there is a grade II listed monument to his memory.

NB. I have used his obituary from the Exeter Flying Post dated 26 March 1801 to create most of this obituary since there are significant differences with the dates used on his Wikipedia page.
Bill-N (Norton-2150). 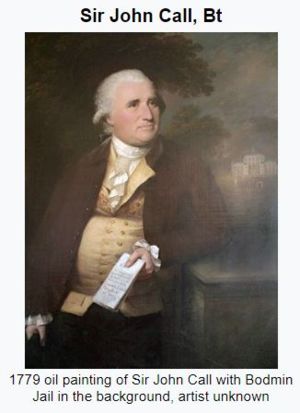