John was born into a family of musicians, his father and grandfather being organists at York Minster. His father taught him music in his early years. From the age of seven, John performed in public concerts, in York and elsewhere, both as organist, pianist, and violinist. From his youth he played on the organ at York Minster.

Afterwards his father placed him under the tuition of Dr Hague, professor of music at the University of Cambridge and also under that of Polish violinist and composer Feliks Janiewicz for violin playing. In 1812 he graduated at Cambridge as Mus. Bac. He followed this in 1819 with that of Mus.D.

They one daughter, Elizabeth, and three sons, Charles, John, and Thomas.

The offer of the post of organist was made by the Dean and Chapter of Durham and accepted, but at the solicitation of the Dean of York he returned to the York Minster as assistant to his father. He also took duty as organist at All Saints Church, Pavement.

About 1825 he published a volume of cathedral music of his composition, and he also adapted much classical music for use in the Anglican service. Many of his composition were in his collection Cathedral Music (1828). His anthems include “Holy, Holy, Holy” and “I will cry unto God”.

After the fire in the cathedral in 1829, he devoted much attention to the building of the new organ, which for many years was one of the finest in the world, and at that time the largest in England

On his father's retirement he was appointed organist of the cathedral, a post he held until his death.

On 28 Nov. 1848 following a stroke he became paralysed while playing the evening service, and never afterwards was never able to play the organ again. 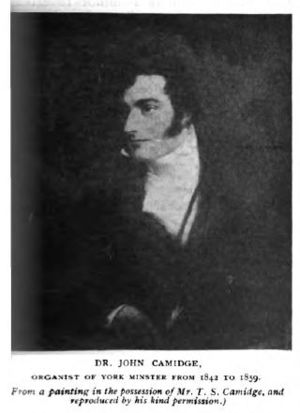 John is 26 degrees from Danielle Liard, 21 degrees from Jack London and 18 degrees from Henry VIII of England on our single family tree. Login to find your connection.