Matthew Camidge[3] was christened 25 May 1764 in Holy Trinity Goodramgate, York,.[1] – the son of John Camidge 1[2] (bap. 1734–1803) and Elizabeth Camidge. Matthew's father gave Matthew, the sixth son, his early musical training. After some time as a chorister of the Chapel Royal under James Nares, Matthew returned to York where he lived the rest of his life. He served as his father's assistant and in 1799 he succeeded his father as organist of York Minster.[3]He played an active part in the musical life of York, appearing as a soloist in piano and organ concertos and promoting music festivals in York Minster. After Matthew retired in 1842, his son,, succeeded him as organist. Matthew married Mary Shaw of York in 1789.[4]They had three sons. One, John, succeeded Matthew on his own retirement, and then passed on the post to his own son. Matthew's other sons took orders, and one of them became canon of York Minster. He died 23 October 1844 in York.

Matthew Camidge was known for his brilliant organ improvisations. He organized huge music festivals given at York in 1823, 1825, and later. As a violinist, he led the orchestra of the York Musical Society. He contributed 30 excellent hymn tunes for William Richardson's Collection of Psalms, which in later editions became widely known as The York Psalm and Hymn Book. It is likely that Camidge introduced the practice of psalm chanting to St Michael-le-Belfrey, his other church job, which he obtained in 1801. His sonatas, for piano with accompanying violin and cello, are very pleasant works, and representative of the better English music of the time, though not original. He frankly acknowledged, in the preface to his set of organ concertos published in 1817, that he was writing them in the "so long admired" style of Handel and Corelli. [5] Matthew Camidge published works of practical material written for his work as a church musician and teacher as well as anthems and service settings in Cathedral Music, Hymn and psalm tunes, an edition of Henry Lawes' Psalmody for a single voice, Instructions for the Piano forte or Harpsichord and some songs. 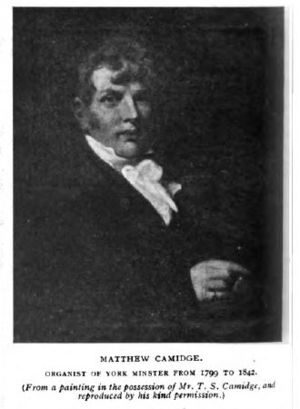 Leave a message for others who see this profile.
There are no comments yet.
Login to post a comment.
W Robertson
This is actually the same person as https://www.wikitree.com/wiki/Camidge-56. The birth year is probably different because a source for christening has been used, but the christening could have been years after birth. Both profiles indicate he was an organist at York Minster during the same years. Camidge-56 would benefit from additional sources if you have them
posted Jul 27, 2018 by W Robertson

Matthew is 27 degrees from Danielle Liard, 22 degrees from Jack London and 19 degrees from Henry VIII of England on our single family tree. Login to find your connection.