John A was enumerated on June 10th for the United States Census, 1870 at the Villa Rica Post Office in Villa Rica District, Carroll County, Georgia as seen in the image of the original. On page 4 of the census, listed are; Samuel C Candler, Martha, Noble D and Mary J. He is listed on page 5 with brothers Charles C Candler, Warren A and another listed as "works on farm", Edmund H Holland.[2]

John Candler was enumerated as brother at Atlanta, Fulton County, Georgia for the June 8, United States Census, 1880. He was noted as at college, born 1862 in Georgia and single as seen in this image of the original census. Also included in the household are self Asa Candler, wife Lucy Candler, son Charlie U Candler, mother-in-law S C Candler?, other Fany Walker, other Ella Walker and brother Noble Candler, as well as a host of boarders named Hall.[3]

John S Candler was enumerated as head of the household in Atlanta Ward 9, Dekalb County, Georgia for the United States Census, 1910. He is noted to be born in 1862 in Georgia and married. Also included in the household are wife Florrie E Candler, daughter Allie G Candler, sister-in-law Ruth J Elmer and sister-in-law Virginia Elmer.[4]

John S Candler is the father of record in the death of his son Asa Warren Candler, who died at Emory University in DeKalb County as recorded in his February 16, 1929 Georgia Death . He is listed as having been born January 16, 1885 in Georgia. His mother is listed as Lu A Garnie and his wife Hattie Lee West. He died from abscess of the liver as seen in the image of the original Georgia Certificate of Death[5] 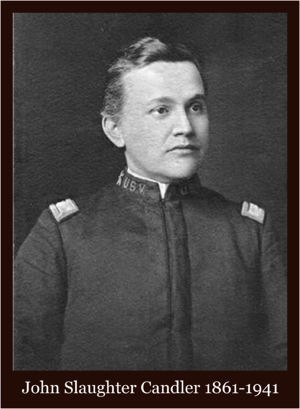