Owen was married to Nancy Ann McLeod-Carden, and they had EIGHT children of record according to FAG source.

He joined the Missionary Baptist Church in 1853. He was upright in his dealings, was an affectionate husband, a kind father and punctual in attending his meetings. After he became a member of the army he tried to adorn the profession he had made, and was truly a shining light in the touted field. R A Timmons, Southern Christian Advocate.

Owen (O.H.R.) was a private assigned to Company C 5th Battalion of Cavalry and Hilliard's Alabama Legion in the CSA. during the Civil War. [1][2]

It was 1862 when Owen passed away from wounds suffered during battle in the Civil War in Atlanta, GA. He died at Alexander's Hospital in Atlanta and was buried on July 18,1862 under the name Owen H. Carden.

ask our community of genealogists a question.
Sponsored Search by Ancestry.com
DNA
No known carriers of O. H. R.'s DNA have taken a DNA test. 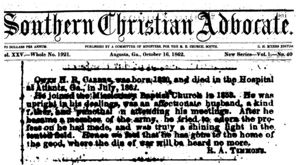