Henry Carey, first cousin through his mother (sister of Anne Boleyn) of Elizabeth I, was created by her Lord Hunsdon of Hunsdon in Jan 1558/9 shortly after her accession. He had been a Member of Parliament for Buckingham in Edward VI's and Mary I's reigns and was made a Privy Counsellor and Knight of the Garter a little later in Elizabeth's. His mother had been Henry VIII's mistress before the King fell in love with Anne Boleyn, indeed at the time Henry Carey was conceived. Accordingly it has been suggested that he was really Henry VIII's son. If one assumes that Henry Carey's actual father was his official one, there is a connection with the Carys Viscounts Falkland through Henry's uncle Sir John Cary, grandfather of the 1st Viscount. [Burke's Peerage, p. 51]

Wikipedia says that Henry Carey and Ann Morgan's marriage resulted in the birth of sixteen children. Other sources give him many fewer.

Children according to Wikipedia:

Eileen Suggs sent the following in an e-mail:

Long before I became interested in gen I was very interested in history and Ann Boleyn and Henry VIII in particular. At the age of 11 I read a historical novel called "Brief Gaudy Hour". Which chronicalled their romance and Anne's subsequent execution. And her sister's affair with Henry was included. So when Henry Carey, son of William Carey and Mary Boleyn appeared in my gen, I placed him with his biological father, Henry VIII. William Carey was Knght of the Privy Chamber (landless and of no credible wealth). He was happy to take Mary off of Henry's hands when she became pregnant (she had a sizeable dowry). King Henry also arranged for Henry Carey's Barony. It was a bone of contention that Mary was able to deliver a son and Anne could not.

BARONY OF HUNSDON (I)

HENRY CAREY, only son and heir of William CARY, Gentleman of the Privy Chamber and Esquire of the body to Henry VIII (who died 22 June 1529), by Mary (who died 19 July 1543) (e), daughter of Thomas (BOLEYN), EARL OF WILTSHIRE [ENG] and EARL OF ORMOND [IRL], was born 4 March 1525. On the death of his mother the representation of the Earldom of Ormond [IRL 1529] devolved on him and his cousin Elizabeth, afterwards Queen. M.P. for Buckingham, 1547-52 and 1554-55. On the accession of Elizabeth, his 1st cousin (and probably, in fact, half-sister), to the throne in November 1558, he was knighted, and soon afterwards, 13 January 1558/9, was created Baron HUNSDON OF HUNSDON, co. Herts, being granted the manors of Hunsdon and Eastwick, Herts, and others in Kent, and £4,000 a year to support his peerage; appointed Master of the Queen's Hawks, with a salary of £40 a year, 31 October 1560; nominated K.G. 22 April 1561. Captain of the Gentleman Pensioners 1564. In that year he conveyed the Order of the Garter to the King of France at Lyons. Governor of Berwick, 25 August 1568, and as such, in the rebellion of the Northern Earls in November 1569, he gained a signal victory, February 1569/70, over Sir Leonard Dacre (who styled himself Lord Dacre of Gillesland. In 1571 lie sumptuously entertained the Queen at Hunsdon, and on 23 October of that year, as Warden of the East Marches toward Scotland, was empowered to treat with the Regent of Scotland for the pacification of that country. Keeper of Somerset House, 31 July 1574; P.C. 1577; Captain General of the forces for the defence of the borders, 16 January 1580/1, Lord Chamberlain of the Household, July 1585, and Chief Justice Itinerant. of the Royal Forests this side Trent, 20 December 1591, all till his death. At the time of the menaced Spanish invasion he was appointed, 20 July 1588, Lieutenant, Principal Captain, and Governor of the army "for the defence and surety of our own Royal person," at Tilbury. Chief justice in Eyre South of Trent, 1589 till his death; Recorder of Cambridge; High Steward of Ipswich and Doncaster, 1590; joint Commissioner for the Office of Earl Marshal, 1590; High Steward of Oxford for life, 2 March 1591/2. He married (lic. Fac. 21 May 1545) "Ann Morgan of the family [i.e., household] of our Lord the King," which lady was apparently daughter of Sir Thomas MORGAN, of Arkestone, co. Hereford, by Anne, daughter of Sir Robert WHITNEY, of Whitney, co. Gloucester. He died at Somerset House, Strand (of which he was Keeper), 23 July 1596, and was buried in Westminster Abbey, aged 70. (b) M.I. there and at Hunsdon. His widow, who was appointed Keeper of Somerset House 14 December 1595 (with a view, no doubt, to her succeeding her husband in the office), died 19 January 1606/7, and was bur. with him. [Complete Peerage VI:627-9, (transcribed by Dave Utzinger)]

(e) On her father's death, 13 May 1538/9, she and her sister Anne's only child, the Princess Elizabeth, were coheirs of his large estates. On Elizabeth's death 24 Mar 1602/3, Anne's issue became extinct, and Henry (Carey), 1st Lord Hunsdon and Mary's only son, became sole heir. This Mary, who was sister to Anne Boleyn (Queen Consort to Henry VIII), is said to have been, at the time of or after her marriage (4 Feb 1520/1), mistress to the King, who is even supposed to have been the father of Henry Carey, her son. The only other known mistress of this King was Elizabeth, daughter of Sir John Blount (afterwards wife of Gilbert, 1st Lord Tailboys), by whom he was father of a son whom he created Duke of Richmond. It is certain that as early as Dec 1529 Chapuys writes of the King, when contemplating the marriage with Anne Boleyn, that "had he, as he asserts, only attended to the voice of conscience, there would have been still greater affinity to contend with in this intended marriage than in that of the Queen, his wife; a fact of which everyone here speaks quite openly." The fact of the existence of such a connection is much confirmed by the special words inserted in the dispensation for the King's marriage in 1533 with the said Anne--ie. that it might be with any woman even in the first degree of affinity "ex quocunque licito, seu illicito, coitu conjuncta." In 1533, also, an Act of Parliament was passed to permit marriage with the sister of a discarded mistress, but in 1536 (after Anne Boleyn's death and when her marriage had been annulled) the old Canon Law was restored which forbade the same. The seniority of the sisters if doubtful, but it seems clear that Anne, though Camden asserts her to have been born in 1507, must have been born at least five years earlier. Mary is stated by her grandson, the 2nd Lord Hunsdon, in a letter to Burghley, dated 6 Oct 1597, to have been the elder of the two sisters, and he founds his argument as to his right to the Earldom of Ormond on such seniority. Such a statement appears to be of more weight than the M.I. to Lady Berkeley, and the generally received pedigrees which assert the contrary. Mary is described by the Papal Nuncio, Ridolfo Pio, as "una grandissima ribalda et infame sopra tulle." In her Inq.p.m. she is called daughter and sole heir of Thomas, late Earl of Wilts and Ormond, the child (afterwards Queen Elizabeth) of her attainted sister not being taken into account.

[b] He had been desirous of being created Earl of Wiltshire, and it is stated that the Queen caused the patent so creating him, and an earl's robes, to be laid on his deathbed, on which he said, "Madam, seeing you counted me not worthy of this honour while I was living, I count myself unworthy of it now I am dying." Lloyd (1665) describes him as "a fast man to his Prince, and firm to his friends and servants, downright honest and stout hearted. . . . His custom of swearing and obscenity in speaking made him seem a worse Christian than he was, and a better knight of the carpet than he should be." "Truly my Lord Hunsdon was ever reputed a very honest man, but a very passionate man, a great swearer and of little eminency." (Godman's Court of King James, vol. i, p. 178). V.G.

Thanks to Edward Nelson for starting this profile. Click the Changes tab for the details of contributions by Edward and others.

Sponsored Search by Ancestry.com
DNA
No known carriers of Henry's DNA have taken a DNA test. 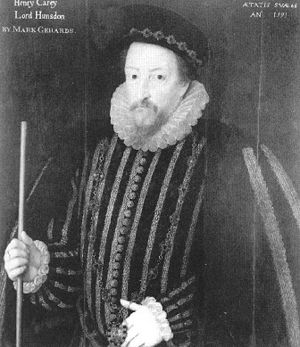 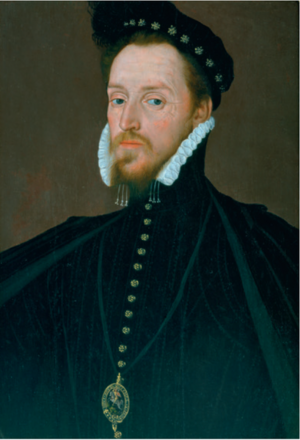 Leave a message for others who see this profile.
There are no comments yet.
Login to post a comment.
Isaac Taylor
Can we fix this profile? Henry is the son of Henry VIII.

What's the Wikitree policy about modelling illegitimate children? Do we show the legal family or the birth family? This one is pretty cut and dried surely. His dad spent the rest of his life trying to have another son, and thus this Carey-1 is almost literally personally responsible for the anglican church and arguably the later protestant migration to the new world.

Pretty amazing history. And it gets better!

His living descendants apparently include among others Rashida Jones... who would be basically perfect to play his mistress, Emilia Bassano, who was probably "William" Shakespeare. Their two children Henry and Mary are named after this Henry Carey-1's parents, Henry Tudor (VIII) and Mary Boleyn.

posted May 17, 2019 by Isaac Taylor
Mark Cary
Rather interesting, but I feel that someone or some entity, perhaps even the current Royal Genealogical Society or Royal family needs to follow up with some descendants and their DNA to try and determine IF this individual is a Cary/Carey or Tudor. I'm open to offering my DNA for future determination. This individual as well as William Cary/Carey is one of my Ancestors.
posted Mar 06, 2019 by Mark Cary

So if Henry Carey is actually King Henry Tudor's son by his mistress Mary, then Henry VIII is my 13th great-grandfather.

As it stands, Henry and Anne's daughter Elizabeth I Queen of England is my first cousin, 14 generations removed. But if King Henry fathered Henry Carey as well, then Elizabeth is also my 12th great-grand aunt.

All in the family.

Vic Watt
I can't find anything on Anne except the Wikipedia article for Henry. She isn't included at TudorPlace. Other bios don't list her, and Wikipedia gives no source. if you have access to Cokayne's Complete Peerage, that might help. I can't find the right volume online.
posted Jun 06, 2014 by Vic Watt

Kelly Fitzgerald
Is it possible that Anne Cary was illegitimate? She's not listed on Ann Morgan's profile here or in her wikipedia enty. I have an Anne/Anna Cary from Somerset who married a drapter. It doesn't seem to me that if she was legitimate that she would marry a draper when her sisters were marrying into the nobility.
posted Jun 05, 2014 by Kelly Fitzgerald