Robert Carey was a member of the aristocracy in England.

Robert Carey (b. c. 1560 - d. 12 Apr 1639 Moor Park, Hertfordshire), was the tenth and youngest son of Henry Carey, Baron Hunsdon and Anne Morgan. His wife was Elizabeth, was the widow of Sir Henry Widdrington. Her parents were Sir Hugh Trevannion and Sybilla Morgan. Robert and Elizabeth were married on 20 August 1593, and had two sons and one daughter:[1][2]

As a young man he accompanied several diplomatic missions abroad and took part in military expeditions. In 1587 he joined in the attempt to relieve Sluys. In 1588 served as a volunteer against the Spanish Armada, and commanded a regiment in the Earl of Essex's expedition to Normandy in support of the Protestant Henry IV of France in 1591, taking part in the siege of Rouen. He was knighted by Essex the same year for having by his intercession with the Queen procured his recall.

Carey was a Member of Parliament.

From 1593 till the end of Elizabeth's reign, he occupied various posts in the government of the Scottish borders, being appointed warden of the middle march in 1596, which he held till February 1598.

This was some of the most important work of his life, and he was largely responsible for easing the troubles and the depredations of the Border Reivers. His conflict with the Scottish fyrebrande Robert Ker, 1st Earl of Roxburghe was only settled after great skill and tact on Carey's part.

In March 1603 he visited the court, and witnessed Queen Elizabeth I's last illness, which he described in his memoirs. Anxious to recommend himself to her successor James I, and disobeying the orders of the council, he started on horseback immediately after the Queen's death on the morning of 24 March 1603, in order to be the first to communicate the tidings to James, arrived at Holyrood late on 26 March, and was appointed by the King a Gentleman of the Bedchamber. But his conduct met with general disapproval and merited censure as "contrary to all decency, good manners and respect," and on James's arrival in England he was dismissed from his new post.

On 23 February 1605, however, he was made governor of Prince Charles. Carey's wife, Elizabeth Trevanion (not Aletta Hogenhove who was the wife of his nephew Sir Robert Carey), was responsible for the early training of the weak, stammering Charles. She taught the Prince, a late-developer, to walk and talk at the age of three, and was close to him throughout his life. Upon her husband's accession to the peerage, she became known as Dame Robert Carey, and is said to be the "Old Dame Dob" referred to in the Jack and Jill nursery rhyme, for her ministrations to the "bruised" King Charles I after his plan to raise revenue by lowering the volume of liquid in the jack (1/2 pint) and gill (1/4 pint) was foiled by publicans by simply making up the difference (up to the 1/2 pint line that is marked by a crown on pint glasses) with water.

In 1611, we was made the master of the robes to the Prince, in 1617 his Chamberlain, and on 6 February 1622, he was created Baron Carey of Leppington. In 1623 he followed Charles in his visit to Philip IV of Spain. Following Charles' succession to the throne Robert was created Earl of Monmouth in 1626. In 1621 he sat in Parliament for the last time as MP for Grampound.

Robert died at Moor Park, Hertfordshire on 12 April 1639, and was buried at Rickmansworth.[1] He was suc. by his eldest son Henry Carey, 2nd Earl of Monmouth (b. Denham by Uxbridge in London, Jan 1596 – dspm. 1661), but the peerage became extinct when the second earl died without surviving male issue. 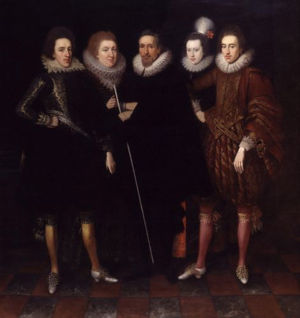 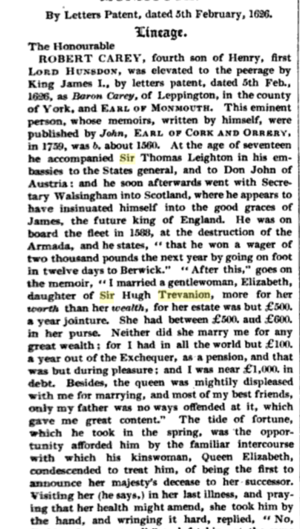