Catherine Carey was the first cousin of Queen Elizabeth I. She was nominally the daughter of William Carey and Mary Boleyn. Her mother Mary, was a mistress of Henry VIII before her sister, Anne Boleyn, married him and it was rumoured that Catherine was actually the king's daughter.[1] Catherine never claimed such a relationship, and Queen Elizabeth never recognized Catherine as her half-sister. Only circumstantial evidence supports this assertion, although she was certainly one of Elizabeth's favourites.

On 26 April 1540 Catherine married the protestant courtier Sir Francis Knollys. It is believed that the two might have met in November 1539 as both appear in the Letters and Papers of Henry VIII. Francis is recorded as one of the men sent to greet the king’s fourth wife, Anne of Cleves, upon her arrival at Calais and Catherine is named as one of the young women delegated to meet Anne once she arrived at court. [2] [3]

Francis and Catherine's family grew prodigiously during the 1540s and 1550s. Their children, reputedly recorded in a family book by Francis Knolly's own hand, included: [4]

With the death of the young King, powerful factions worked to control the crown of England. Francis did not participate in the coup to place Lady Jane Grey on the throne, even though he was very concerned about Queen Mary's Catholic leanings. The idea of a Catholic England evidently repulsed Francis and so, with his twelve year old son Henry, he departed from Dover in Sep 1553 and made for Geneva. It is believed that they conducted a Protestant mission to meet with John Calvin. Francis and Henry had returned home by the autumn of 1554. [5][6] On 5 Feb 1555, under the orders of Mary Tudor, the first Protestant burnings took place in England putting Francis and his family in grave danger. In the summer of 1555 Francis once more left England for safety in Europe and by June of 1557 he, Catherine and five of their children were in the German city of Frankfurt. Where the other six children were is not known. [5]

Catherine returned to England by 14 Jan 1559, and became a lady of the privy chamber to Queen Elizabeth. Her status meant that she was to tend to the Queen's personal needs, sleep at the foot of her bed when required and help dress the Queen, among other duties. It was a position of intimacy and one which evidently Elizabeth I came to cherish. [7]

Catherine died at Hampton Court, still in the queen's attendance. At the time, Francis was guarding Mary, Queen of Scots, at Bolton Castle and had been forbidden by the Queen to return to Catherine's side. Queen Elizabeth, possibly out of a sense of guilt at keeping the couple apart, went on to pay for Catherine's lavish funeral which ultimately cost £640 2s.11d. [8]

Ten days after her death, her husband Francis wrote to the Privy Council expressing his grief:

My case is pitiful. For my wife disburdened me of many cares. She kept all the monuments of my public charges as well as my private accounts and now my children, my servants, and all other things are loosely left without good order.[9]

There's a small plaque about Catherine in Westminster Abbey. (Although the plaque shows Catherine's death date as January 15, 1568, that date is "Old Style," and she actually died in 1569.) The Knollys Chapel at Saint Nicholas Church, Rotherfield Greys, Oxfordshire, contains a large tomb in which Catherine and Francis are buried. The tomb has effigies of Francis and Catherine, with individual figures of seven sons, six daughters and, probably, son William's wife. Eric Hardy has placed a number of coloured photos of the tomb on Flickr.

The epitaph on her memorial in the Chapel of St Edmund at Westminster Abbey reads: The Right Honourable Lady Catherine Knollys, chief Lady of the Queen's Majesty's Bedchamber, and Wife to Sir Francis Knollys, Knight, Treasurer of Her Highnesses Houshold, departed this Life the Fifteenth of January, 1568, at Hampton-Court, and was honourably buried in the Floor of this Chapel. This Lady Knollys, and the Lord Hunsdon her Brother, were the Children of William Caree, Esq; and of the Lady Mary his Wife, one of the Daughters and Heirs to Thomas Bulleyne, Earl of Wiltshire and Ormonde; which Lady Mary was Sister to Anne Queen of England, Wife to K. Henry the Eighth, Father and Mother to Elizabeth Queen of England.

Below it is a Latin verse which can be translated as: O, Francis, she who was thy wife, behold, Catherine Knolle lies dead under the chilly marble. I know well that she will never depart from thy soul, though dead. Whilst alive she was always loved by thee: living, she bore thee, her husband, sixteen children, equally female and male (that is, both gentle and valiant). Would that she had lived many years with thee and thy wife was now an old lady. But God desired it not. But he willed that thou, O Catherine, should await thy husband in Heaven. [10] 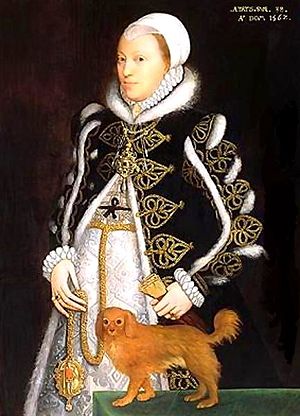 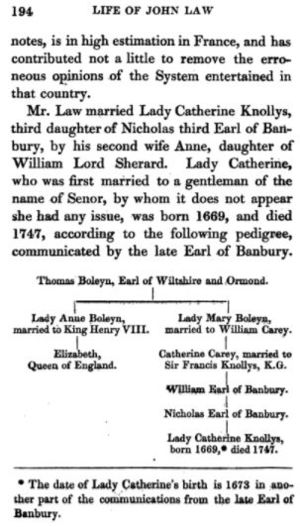 Jo Fitz-Henry
Catherine-431 and Carey-2 appear to represent the same person because: Duplicated line created today. Catherine-431 has had her names entered the wrong way round. Needs to be merged into Carey-2
posted Jan 16, 2021 by Jo Fitz-Henry

Anita Wray
I think this is where I ran into the specifics of the Carey spelling. Someone asked about that recently. I had read that Carey specified a specific line. That other Carys have no e. Ill go back and read. If I find it Ill bring it forward. Wray-1910
posted Oct 10, 2019 by Anita Wray

Amelia Utting
Carey-4481 and Carey-2 appear to represent the same person because: These people are clear duplicated. Both born to Mary in the same year, with the same name, in the same place, both married to a man named Francis Knollys. Both this Catherine and this husband are duplicates of already-created profiles.
posted Mar 08, 2019 by Amelia Utting

Kelly Fitzgerald
She looks a lot like Henry VIII & in the middle portrait, I can see Edward IV. Wish there was a way to prove her parentage conclusively!
posted May 11, 2014 by Kelly Fitzgerald