In 1862 at about age 17 or 18 he joined a Confederate cavalry unit that became known as the 15th Confederate Cavalry attached to the Confederate Army post at Pollard, Alabama. He was AWOL during most of the war however, and in September 1864 deserted to the Union Army at the Pensacola Navy Yard.

After the war he married Martha Lassiter ca. 1865. About 1888 he was instrumental in establishing a School called "Carnley's" on Pine Log Creek south of today's Children's Home Community and served as its supervisor for several years. Later renamed Pine Log, the school closed in 1915, a year after George died.

He ended life with the title of Reverend, but when he first acquired that title is unknown. The first record identifying him as a minister is dated 1905. A year later he was ordained as a Congregationalist minister, but he had probably been a lay preacher for many years previously. From 1905 to the year of his death he pastored at churches in Stella, Ealum and Gordon. The Gordon church, which no longer exists, stood on the same property as the Miller Community Cemetery. George's service as pastor of the church when it existed probably accounts for his burial in the cemetery. 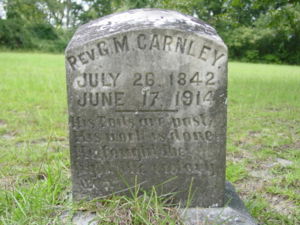