Charles the Bald was born 13 June 823.[2] He was the youngest son of the Emperor Louis the Pious (Hludowic) by his second wife Judith. [2] His father was Louis I "le Pieux"[1] and his mother was Judith Welf.[1]

Timeline Between Birth and First Marriage

837: Father Louis I "Le Debonnaire", by arrangement with Louis the German and Pepin gave Charles the land West of the Meuse, Burgundy, Chartres and Paris together with all the bishops, abbots and counts who held benefices in these territories. A portion of Neustria was added in 838, and upon Pepin's death, Louis Le Pieux made Charles King of Aquitaine. [3]

24 Jul 840: emperor Lothar, in Strasburg, refuses to support land claims of Charles (from agreement of Worms on 30 May 839). The two brothers, Louis and Charles, unite against Lothar and the War of the Three Brothers begins. [3]

24 June 841 Fontenoy-en-Puisaye: defeats brothers Lothar in spite of arrival of the Army of Aquitaine in the Imperial ranks -- and loss of 40,000 lives) and Louis Le Germanique. [3]

14 Feb 842 Strasbourg: Charles and Louis sign alliance. Leaving Strasbourg, the two brothers defeat the imperial army of Lothar just West of Comblence. Lothar leaves Aix-le-Chapelle precipitously, pursued by the two brothers. In Mellecey, not far from Chalon-sur-Saone, Lothar proposes a plan to establish perpetual peace which is acceptable to both Louis and Charles. On 15 June, they sign the preliminary peace document. [3]

01 Oct 842: each of them sends 40 commissioners to Metz to forge the official document. Prudence, the Bishop of Troyes, notes that Louis regained Germania in the East, Lothar gets the middle part of the Franc Kingdom, including Italy, and Charles obtains the Western lands (West of the Rhone, including Soissons). After that Charles goes to the Palace in Quierzy, where he marries Ermentrude.[3]

843: Charles signs Treaty of Verdun ... splits Kingdom of Charlemagne. ... destiny of Occidental Europe heavily influenced to this day. Louis obtains all lands East of the Rhine, including cities of Spire, Worms, Mayence. Lothar gets all the lands extending between Rhine and Escaut, Cambresis, Hainaut, country of Mezieres, and all countships neighboring the Meuse, through Saone and Rhone, Artois and Italy. Charles got all the lands East all the way to Spain. Kingdom of Charlemagne split forever, with serious rift between germanic lands of Louis, and French lands of Charles. Intervening lands extending from Frisia to Rome, from North Sea to Mediterranean including what would become Holland, Belgium, Lorraine and Switzerland a sore point between these two. The only thing that mattered to Lothar was the fact that both capitals (Aix and Rome) were located in his territory, thus legitimizing the title of Emperor.[3]

6 June 848: King of Aquitaine, though he could not defend his kingdom against the Normands. [3]

849 Corbie: had Charles of Aquitaine jailed [3]

850: attacks Bretagne and leaves a garrison in Rennes. No sooner does he leave, that Nomenoe takes the city and then takes Nantes as well. [3]

852: Charles has Pepin II locked in the Monastery of Saint-Medard de Soissons. The Normands under Godfrid pillage Tours and Angers and penetrate via the Valley of Escaut all the way to the Seine. [3]

9 Sep 869 Metz: Charles annoints himself King of Lorraine by the Bishop Hincmar.[3]

Mar 867: Charles d'Aquitaine dies, and his father Charles le Chauve is recognized as King by the Assembly in Pouilly-sur-Loire. Upon the death of his nephew, Lothar II on 8 August 869, Charles sped to Lotharingia and had himself crowned King of Lotharingia annointed on 9 Sep in the cathedral at Metz by Bishop Adventius of Metz and Archbishop Hincmar of Rheims. In 9 August 870, through the Treaty of Meerseen, Louis "Le Germanique" and Charles "Le Chauve" reach an agreeable compromise whereby they divide the lands of Lothar II between themselves, leaving Louis II no part of the inheritance. As soon as Louis II died on 12 August 875, Charles rushed to Italy and received the imperial crown and is annointed by Pope John VIII on 25 December 875. In Pavia on 5 January 876, by acclamation of the counts and nobles of Italy, Charles becomes King of Italy. On 31 January 876, the Archbishop of Milan proclaims Charles as Emperor. The French ecclesiasticals and nobles, having some misgivings about Charles' ability to take care of his Kingdom meet in Ponthion. Charles joins them dressed in the attire of the Frankish King. As soon as they declare him elected and recognize his imperial authority, Charles donned the Byzantine crown, and purple vestment of emperor. When Louis le Germanique dies on 28 August 876, Charles claims Lorraine as his own. [3]

While on an expedition in Italy against the Sarrasins, through the specific request of Pope Jean VIII, Charles le Chauve dies at the foot of Mount Cenis.[3]

Died while ill and traveling through the pass of Mont Cenis at Brides-les-Bain, while on his way to Gaul.

Buried at the abbey of Nantua, Burgundy.

Issue of Charles and Ermentrude

Issue of Charles and Richildis

Charles and Richildis had five children:[9]

Children linked in WikiTree but not named in Cawley/FMG 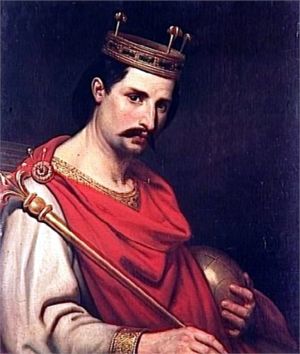 Charles, Emperor of the West and King of France Image 1 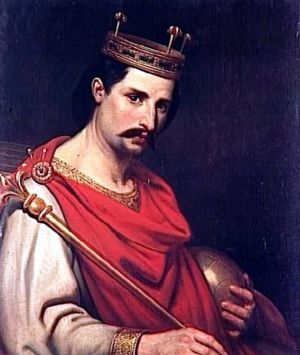 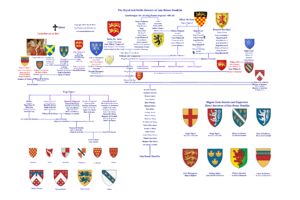 Andrew Lancaster
Stormy Knight I guess what is confusing is that his father's profile has a reconstructed Frankish name (Hludowic), whereas in this article he is given the modern French version of the same name, Louis? But they are the same name. Latin would be Ludovicus whereas Charles would be Karl or Karel in Frankish and Carolus in Latin.
posted Jun 28, 2018 by Andrew Lancaster

Stormy Knight
The top of this page lists different parents than the body of the biography.  ????
posted Jun 27, 2018 by Stormy Knight

Jack Day
I've added material in a section on "Issue" in order to highlight which of the children linked on WikiTree have documentation. Two do not and need further review to see if they are actually children of Charles. I found the source for the timeline material and added it. I removed the "long profile" category, but a further review could still condense the timeline into enough to convey an understanding of how Charles spent his life without the detail appropriate to a political biography.
posted Jan 11, 2017 by Jack Day
RJ Horace
Emperor of the West and King of France-1 and Carolingian-17 appear to represent the same person because: clearly they're the spitting image of each other
posted Sep 19, 2015 by RJ Horace

Vic Watt
The Bald-4 and Carolingian-17 appear to represent the same person because: Please merge. Merge of mother already proposed. Thanks.
posted Mar 05, 2015 by Vic Watt

Charles II is 36 degrees from Mary McCauley, 37 degrees from B. W. J. Molier and 19 degrees from Henry VIII of England on our single family tree. Login to find your connection.