Charlemagne (Karolus Magnus) "King of the Franks, Emperor of the Romans" Carolingian
Born about 2 Apr 0748 in Austrasia, Francia

Charlemagne expanded the Frankish kingdom to include much of Western and Central Europe. His rule is also associated with the Carolingian Renaissance, and his foreign conquests and internal reforms, shaped Western Europe and the European Middle Ages. He is numbered as Charles I in the regnal lists of Germany, the Holy Roman Empire, and France.

Charlemagne (742/7 – 28 Jan 814) had children with two wives and six mistresses. Only four of his grandsons were legitimate. Their father was Hludowic (Louis the Pious).

Commonly known as: Charlemagne, King of the Franks, Emperor of the Romans
This name is commonly used in both English and French does not appear until the 12th century.

"On that very and most holy day of Christmas ... Leo the pope put [a/the] crown on his head, and acclamation was made by all the people of the Romans: ‘To Charles Augustus, crowned by God, great and pacific emperor of the Romans, Life and Victory!’"[1]

The day of his birth as April 2nd comes from Lorsch Calendar ("IIII. Non. Apr. Nativitatis domni et gloriosissimi Karoli imperatoris et semper Augusti.") and is widely accepted.[3] It is the year of his birth which is uncertain. The contemporary historian Einhard wrote that Charlemagne was about age 71 at his death in 814. For this reason, the year of his birth is frequently given as 742. However, there are problems with this date and it does not match other records. He was certainly not born before the marriage of his parents which occurred in 744. The year is given as 747 in Annales Petaviani; however, there are reasons to think this is also wrong. The entry immediately before the birth of Charlemagne discusses the departure of his father for Rome which could not have been before 15 August 747. Also, 2 April 747 was Easter Sunday, and it is unthinkable that Charlemagne could have been born on Easter without it being a widely known and celebrated fact. Bercher points out that if Easter was being used as the beginning of the New Year, then 2 April 748 would still have been 747 in that calendar system. For these reasons, the most probable date of birth for Charlemagne is 2 April 748.

The place of birth of Charlemagne is not given in any contemporary document. He is often assumed to have to have been born in Aachen ( in present day North Rhine-Westphalia, Germany) which was the center of Charlemagne's Frankish empire, but this not actually known. The royal court of the Franks frequently traveled from place to place, so Charlemagne could have been born in any of several cities. The best that can be said is that he was born in Francia (Kingdom of the Franks), most likely in the territory known as Austrasia (though many places in Neustria have also been suggested).

Married: 1st - Unknown (sometimes called Desiderata), daughter of Desiderius, king of the Lombards in 770. Charlemagne's mother brought a daughter Desiderius and married her to Charlemagne in 770 to forge an alliance with Lombard kingdom. That her name was "Desiderata" is known from a single source, however, it is now thought to be very unlikely. In 770 or 771, Charlemagne repudiated this marriage to marry Hildegard. They had no children.

Married: 2nd - Hildegard, daughter of Gerold, count of Alemannia, between 770 and 772. The date of this marriage is difficult to determine due to conflicts in the records; it most likely occurred in 771. They had 9 children. She died 30 April 783 in Saxony,

Children of Charlemagne and Hildegard:

Children of Charlemagne and Fastrada:

Married: 4th - Liutgard, an Alamannian of unknown parentage. They had no children.

Died: 28 Jan 814 in Aachen, Austrasia, Francia.[5]
"He died January twenty-eighth, the seventh day from the time that he took to his bed, at nine o'clock in the morning, after partaking of the Holy Communion, in the seventy-second year of his age and the forty-seventh of his reign" (Einhard).[6]

Buried: "The same day" in Aachen Cathedral (Cathedral of Aix-la-Chapelle).[7]

"From the lands where the sun rises to western shores, People are crying and wailing...the Franks, the Romans, all Christians, are stung with mourning and great worry...the young and old, glorious nobles, all lament the loss of their Caesar...the world laments the death of Charles...O Christ, you who govern the heavenly host, grant a peaceful place to Charles in your kingdom. Alas for miserable me." ~ anonymous monk of Bobbio[8]

1165: Frederick I put Charlemagne in a sarcophagus beneath the cathedral floor.

1215: He was re-interred by Frederick II in a casket of gold and silver.

His appearance as described by Einhard's Vita Karoli Magni in his twenty-second chapter:

"He was heavily built, sturdy, and of considerable stature .... round head, large and lively eyes, a slightly larger nose than usual, white but still attractive hair, a bright and cheerful expression, a short and fat neck, and a slightly protruding stomach. His voice was clear, but a little higher than one would have expected for a man of his build. He enjoyed good health, except for the fevers that affected him in the last few years of his life. Toward the end he dragged one leg. Even then, he stubbornly did what he wanted and refused to listen to doctors, indeed he detested them, because they wanted to persuade him to stop eating roast meat, as was his wont, and to be content with boiled meat." [9] 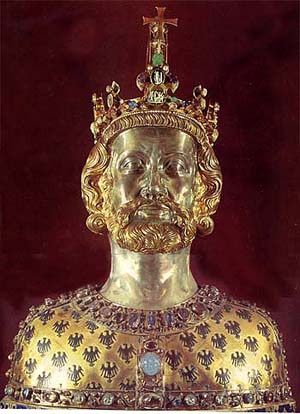 Charlemagne of the Franks Image 1

Charlemagne of the Franks Image 2 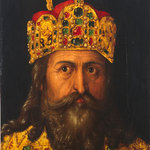 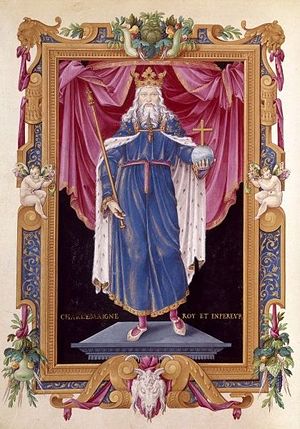 Leave a message for others who see this profile.
There are no comments yet.
Login to post a comment.
Rod Piper
Technically he should be called Karl I König der Franken, Römischer Kaiser
posted Jun 21, 2022 by Rod Piper

Michael Cayley
Thanks. One can argue for ever about what names to give him. But he would not have spoken German as it is known today.

It is unlikely to be helpful to attempt to reproduce in name fields the version of his name that may have been used in his childhood and later in the dialect of Franconian/Old Frankish I would suspect was his birth language. Latin was widely used for many administrative purposes in his lifetime, and for education.

Names on WikiTree for medievals are often a compromise between what is theoretically right if we attempt to follow the "their conventions not ours" principle, and what is likely to be helpful. We often have no way of knowing what people called themselves in daily life. Last names for this period are almost invariably an artificial construct - this is unavoidable as last names were virtually unknown at the time.

John Atkinson
Thanks Raymond, but without actually seeing the lineages on the website, it is impossible to determine the accuracy of the list of gateway ancestors.

However several of the books on the list of Links & Publications are not considered very up-to-date or reliable, which is concerning.

SJ Baty
A translation for this - inline text, in the research notes, or as part of the citation would be useful:

posted May 03, 2018 by SJ Baty
James LaLone
Brief sketch - http://www.thehistoricaldiaries.com/royalty-world-leaders/charlemagne/
posted Feb 28, 2017 by James LaLone
James LaLone
I hope someone who is qualified for pre-1500 will recheck Charlemagne's ancestry, I keep finding variations: http://www.genealogics.org/pedigree.php?personID=I00000001&tree=LEO, http://roglo.eu/roglo?lang=en&m=A&i=4786069&v=5&t=N&sosab=10&siblings=on&notes=on&src=on&bd=0&color=, http://archiver.rootsweb.ancestry.com/th/read/gen-medieval/1995-06/0802977002, I see for some of the ancestors that http://fmg.ac/Projects/MedLands/index.htm is quoted as a source but others say it leaves a lot to be desired. Thanks.
posted Feb 22, 2017 by James LaLone
James LaLone
Of possible interest - https://www.reading.ac.uk/web/files/GCMS/RMS-2012-04_M._Ailes,_Charlemagne_'Father_of_Europe'.pdf
posted Jan 04, 2017 by James LaLone