"Holy Roman emperor (840-55), and eldest son of Holy Roman Emperor Louis I, the Pious, and grandson of Charlemagne. Lothair became co-ruler with his father in 817 and was crowned by the pope six years later.

He twice conspired with his brothers in revolts against their father. In 839 Lothair received the eastern part of the empire in addition to Italy, which he had received in 822.

After the death of Louis I, Lothair attempted to assert his power over his brothers, but he was defeated by them at Fontenoy, France, on June 25, 841.

By the Treaty of Verdun (843), the title of Holy Roman emperor was guaranteed to Lothair, together with sovereignty over Italy, Burgundy, Alsace, Lorraine, and the Low Countries.

After dividing his kingdom among his three sons, Lothair retired to a monastery. His second son, sometimes called Lothair II (circa 835-69), reigned from 855 to 869 over the kingdom of Lotharingia."[citation needed] 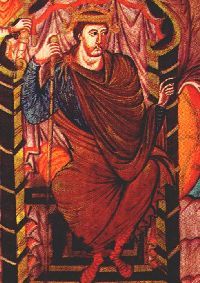 William Catambay
Seems his title should be "Holy Roman Emperor", with his son, Lothair II, being "King of Lotharingia". Also, seems the spelling of his wife's name should be Ermengarde, not Irmingard.
posted May 31, 2019 by William Catambay