The second wife of President Theodore Roosevelt. She was First Lady during his presidency (1901-1909).

Her middle name was the surname of a paternal great-uncle, Robert Kermit.

Charles Carow, (born 4 October 1825, New York, New York, died 17 March 1883). Son of a successful mercantile family, Carow pursued an import-export business. Shamed by the financial difficulties of her father and the resulting deprivations she perceived these matters to have effected on her childhood, Edith Roosevelt made a lifelong effort to destroy many records and accounts about him.

Although Edith Kermit Carow had a teen romance with Teddy Roosevelt, he married someone else. The two were not reunited until after he became a widower. When they moved into the White House in 1901, it wasn't quite big enough for a family of six children, so Edith had a new West Wing built. She also established many of the traditions of the First Lady that remain today. 11, 2014 [3]

Private kindergarten and primary school education, the Theodore Roosevelt, Sr. home, 28 East 20th Street, and Anna Bulloch Gracie home, Park Avenue, New York, New York, approximately September 1864-April 1869.As a child, Edith Carow and her sister Emily were raised by an Irish immigrant nursemaid, Mary Ledwith, who spoke frequently of the impoverished life she had left in Ireland. Similarly, it was through Anna Bulloch Gracie, another woman mentor of family association and the sister of Mrs. Theodore Roosevelt, Sr. that she learned how to read, along with the Roosevelt children (Elliott, Theodore, Corinne and Anna). Anna Gracie further instructed Edith Carow in needlework, with other girl students, at her rented home on Park Avenue. Theodore Roosevelt, Sr. also taught Edith Carow and his own children in natural studies with trips to the countryside, wrote plays for them to memorize lines and perform and gave them topics to prepare oral recitations on. Early on, Edith Carow evidenced a voracious appetite for reading and poetry.

Dodsworth School for Dancing and Deportment, Twenty-Sixth Street and Fifth Avenue, New York, New York, 1869-1871. Here Edith Carow was taught not only how to formally dance, but to affect the social mannerisms which denoted the upper-class.

25 years old, 2 December 1886 to Theodore Roosevelt, rancher and author, (27 October 1858, New York, New York, died 6 January 1919, Oyster Bay, New York) at St. George’s Anglican Church, Hanover Square, London, England. After their wedding ceremony, the Roosevelt took a honeymoon in France, visiting Paris, Lyons, Marseilles and Hyeres in the Provence region and then Florence, Rome, Venice, Pompeii, Naples, and Capri., joined by her mother and sister who settled in Rome to live. An erroneous account of the Roosevelt marriage, confusing her maiden name “Carow” with the aristocratic Maryland “Carroll” family conveyed the false impression in U.S. newspapers that she was six years younger than her real age and a Roman Catholic.

Edith Roosevelt became pregnant with her first child while on her honeymoon. She was in close accord with her husband’s strict and pronounced moral code and designation of gender roles: all citizens should be encouraged to assume the role of parents in society and those who did not should be penalized by federal tax; men should remain celibate if unmarried; those convicted of rape should receive the death penalty.

Edith Roosevelt suffered at least two known miscarriages, once early in her marriage, on 8 August 1888 and another time while serving as First Lady, on 9 May 1902.

It was Edith Roosevelt who insisted that she raise as her own daughter the lone child of Theodore Roosevelt’s first marriage, Alice. It can be speculated that the child he only referred to as “Baby Lee” was a living reminder to him of the painful loss of his first wife. Raised for the first three years of her life by his sister Anna, Theodore Roosevelt was inclined to continue this arrangement, telling her “if you wish to you shall keep Baby Lee.” Once he had decided to remarry, Roosevelt warned his sister Corinne that he “did not care to see” his late first wife’s sister during a visit to New York. Edith Roosevelt insisted that her stepdaughter call her “Mother,” but also arranged for Alice to spend three weeks each spring and fall with the family of her late mother. [4]

Scandalized by the fact that her husband’s brother, Elliott Roosevelt, fathered an illegitimate child by one of his servants, Edith Roosevelt sought to limit the visits of his daughter, future First Lady Eleanor Roosevelt. Famously calling her niece an “ugly duckling [who] may turn out to be a swan,” she did not encourage a close relationship between Eleanor and her own stepdaughter Alice, who later became rivals both in private and public life.

A family spokesman said “she died very peacefully in her sleep about 6 or 6:15 a.m. today.

At her bedside when the end came were her daughter, Mrs. Ethel Roosevelt Derby, of Oyster Bay, and Mrs. Derby’s husband, Dr. Richard Derby.

Rites “Absolutely Private.” “Absolutely private” funeral services will be held Saturday, with only the family present.

She had been in poor health since she fractured her hip in a fall 13 years ago. Her decline in recent months had been rapid. Besides Mrs. Derby, she is survived by a son, Archibald Bullock Roosevelt, of Cold Spring Harbor, L. I., and a stepdaughter, Mrs. Alice Roosevelt Longworth, of Washington.

She was preceded in death by her three sons, Brig. Gen. Theodore Roosevelt, Quentin Roosevelt and Kermit Roosevelt. Mrs. Roosevelt probably was the most retiring and least publicized of President’s wives.

A Background Figure The lack of publicity, which kept her a background figure, although a gracious and dignified one, was at her own request. She was once quoted as saying:

“A woman’s name should appear in print but twice—when she was married and when she is buried.”

Her latter years were spent in almost complete retirement at her Long Island home. But she did emerge dramatically into the spotlight once—when her late husband’s fifth cousin, Franklin D. Roosevelt, was first nominated for the presidency. Mrs. Roosevelt publicly supported Herbert Hoover and even flew to Washington to be present at the Hoover notification ceremony. But when she was asked to make a statement to newsmen, she replied, characteristically: “I haven’t talked for the press, not in 71 years and it’s too late to begin now.”

She met Theodore Roosevelt as a child of nine at a birthday party when they were next-door neighbors on New York’s 14th street. She became his second wife in St. George’s church, London, when she was 25. She had five children—Kermit, Archie, Ethel (Mrs. Richard Derby), Theodore, Jr., and Quentin. She was the step-mother of the “White House princess, “Alice Roosevelt Longworth, whose mother died at her birth.

Most Widely Known of Sons Probably the most widely known of Mrs. Roosevelt’s sons was the late Theodore, Jr., former governor of Puerto Rico, who died in France, July 12, 1944. He was a brigadier general in the U. S. army, during World War II. While in the White House, Mrs. Roosevelt, Sr., busied herself taking care of the children, keeping house, and sorting out bits of news she thought might interest her husband. It was she who was responsible for passage of the rule that no official presidential china or glass should be disposed of at public sale, and for the present collection of White House mementoes of previous administrations.

Mrs. Roosevelt also was influential in the passage of the bill which led to establishment of the national gallery, now housed in the national museum. “Teddy’s” widow was noted for her keen business judgment, and for her poise in times of stress.

Served Firemen Coffee On one occasion, when fire damaged her Sagamore Hill home, she quietly controlled the excited servants and stayed in the house throughout the excitement—then served the firemen coffee and cakes. Later, she casually referred to the blaze as “just a few shingles off my roof.”

Sponsored Search by Ancestry.com
DNA
No known carriers of Edith's DNA have taken a DNA test. 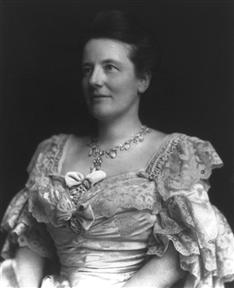 Categories: Spouses of US Presidents | First Ladies of the United States