He became a copyholder at Westcourt Manor in Shalbourne in 1608. This was renewed on 22 June 1614 at which time his age was given as aged 40. His son William married Abigail Briant in Shalbourne and had five children baptized there. The exact match of names and dates consistent with known facts of the family help confirm this is the correct family group for the immigrants to Rehoboth.

Born: About 1575, probably near Shalbourne. This could place his birth in Wiltshire, Hampshire or Berkshire.

The last known record of William1 Carpenter of Rehoboth was the passenger list of the Bevis. It is probably noteworthy that his son was admitted as a freeman to Rehoboth on 13 May 1640 without his father being mentioned. It is reasonable to think, though not certain, that William Carpenter was dead by this date.

The English origins of William Carpenter were published in The American Genealogist in 1995. Research by the same author, Eugene Cole Zubrinsky FASG, has continued up until present time on behalf of the "Carpenter Cousins Project." All work prior to 1995 should be considered out-of-date and suspect. In particular, the Carpenter Memorial published in 1898 should not be used as it makes numerous errors and incorrect guesses as to the origins of the Rehoboth Carpenters. The suggestion that William Carpenter was from London is certainly incorrect. 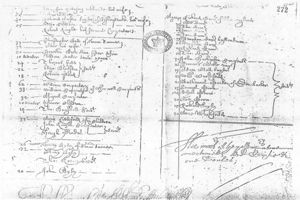 Leave a message for others who see this profile.
There are no comments yet.
Login to post a comment.
M Cole
Looking at the updates to the Zubrinsky article, I'm not sure that the current parents are proven, and probably should be mentioned in the bio, but not attached. see https://www.carpentercousins.com/Wm1_Shalbourne.pdf

The will of Robert Carpenter of Marden, Wiltshire, dated 12 January 1606[/7?] and proved 21 May 1607, names (among others) adult sons William and Richard. It has been claimed that these brothers were William1 Carpenter (father of William2 of Rehoboth) and Richard Carpenter of Amesbury, Wiltshire (father of William1 of Providence, R.I.). While it is not impossible that William1 of Shalbourne was the son of Robert of Marden, evidence of it has not been found; it is unlikely that Richard of Amesbury was Robert’s son. Genetic testing of agnate descendants of William of Shalbourne and Richard of Amesbury has established with a high degree of probability that the two were in fact related but far more remotely than generally believed. For more-detailed discussions of these matters, see NEHGR 159 (2005):64–66, 67n63; William2 of Rehoboth sketch...

Jillaine Smith
This profile is in need of significant (post-merge?) cleanup. There are two duplicate bios that appear to be copy/pasted from another source (not allowed on wikitree). Would one of the profile managers or Trusted List members like to take this on?
posted Jan 20, 2020 by Jillaine Smith

Christopher Childs
He does not appear in Moore's "Abandoning America", and the Bio indicates that he died at Weymouth, Massachusetts Bay... although the reference source offered is just an online tree.
posted Jan 20, 2020 by Christopher Childs
[deleted]
Hi i think i am related to William but i am new to this so does anybody know anyone that could help me find out for sure?
posted Dec 28, 2019 by [deleted]

Thank you for posting on David Carpenter's profile. If you are interested in working with the PGM Project, please visit your Tags and Comments page to add some information.

After you have made your changes, click the Save Tag(s) and Volunteer, then we can get you confirmed. Don't worry, you would only be volunteering to abide by our community guidelines and add profiles for your family.

P.S. If the links in the email do not work, use the ones in the comment section of your profile

Anne B
Sent to PGM via private msg:

I have been researching my ancestry using: A genealogical history of the Rehoboth branch of the Carpenter family in America, etc. by Amos B. Carpenter. Published 1898 by Carpenter & Morehouse in Amherst, Mass .

WikiTree shows the father of William (Carpenter-201) as John. Can you help me resolve this discrepancy please? Do you have a birth record or other evidence you could send me to show that John is indeed his father?

I would appreciate any help you can give me. Thanks!

posted May 11, 2018 by Kenneth Kinman
Sara Mosher
There was no wife Mary Batt and Alice is uncertain. One known child of William Sr. Was William Jr. Please see current, excellent research  Eugene Cole Zubrinsky, "William1 Carpenter of Newtown, Shalbourne, Wiltshire (Bevis, 1638)" (2008; last revised 2 June 2017), online at http://www.carpentercousins.com/Wm1_Shalbourne.pdf
posted Oct 30, 2017 by Sara Mosher
Kate Wolf
This doesn't make sense. If Alice died in 1637, why would William have married again in 1611? Second wife was supposedly John's mother, but he was born in 1601.
posted Aug 27, 2017 by Kate Wolf

Anonymous (Lindt) Large
They are and can be merged.
posted Feb 05, 2014 by Anonymous (Lindt) Large
[Living Lockhart]
I cleaned up and reorganized the BIO section for this gentleman. Still needs a little work, and also, if you all get the opportunity, check out the spouses. I don't know if the two Alice's are the same without delving into research, but perhaps some of you do.  :)
posted Feb 05, 2014 by [Living Lockhart]