Malcolm Scott Carpenter (May 1, 1925 – October 10, 2013), (Cmdr, USN), was an American naval officer and aviator, test pilot, aeronautical engineer, astronaut, and aquanaut. He was one of the original seven astronauts selected for NASA's Project Mercury in April 1959. Carpenter was the second American (after John Glenn) to orbit the Earth and the fourth American in space, following Alan Shepard, Gus Grissom, and Glenn.

DENVER (AP) — Scott Carpenter, the second American to orbit the Earth, was guided by two instincts: overcoming fear and quenching his insatiable curiosity. He pioneered his way into the heights of space and the depths of the ocean floor.

"Conquering of fear is one of life's greatest pleasures and it can be done a lot of different places," he said.

His wife, Patty Barrett, said Carpenter died Thursday in a Denver hospice of complications from a September stroke. He lived in Vail.

Carpenter followed John Glenn into orbit, and it was Carpenter who gave him the historic sendoff: "Godspeed John Glenn." The two were the last survivors of the famed original Mercury 7 astronauts from the "Right Stuff" days of the early 1960s. Glenn is the only one left alive.

In his one flight, Carpenter missed his landing by 288 miles, leaving a nation on edge for an hour as it watched live and putting Carpenter on the outs with his NASA bosses. So Carpenter found a new place to explore: the ocean floor.

He was the only person who was both an astronaut and an aquanaut, exploring the old ocean and what President John F. Kennedy called "the new ocean" — space.

NASA Administrator Charles Bolden said Thursday that Carpenter "was in the vanguard of our space program — the pioneers who set the tone for our nation's pioneering efforts beyond Earth and accomplished so much for our nation. ... We will miss his passion, his talent and his lifelong commitment to exploration."

Life was an adventure for Carpenter and he said it should be for others: "Every child has got to seek his own destiny. All I can say is that I have had a great time seeking my own."

The launch into space was nerve-racking for the Navy pilot on the morning of May 24, 1962.

"You're looking out at a totally black sky, seeing an altimeter reading of 90,000 feet and realize you are going straight up. And the thought crossed my mind: What am I doing?" Carpenter said 49 years later in a joint lecture with Glenn at the Smithsonian Institution.

For Carpenter, the momentary fear was worth it, he said in 2011: "The view of Mother Earth and the weightlessness is an addictive combination of senses."

For the veteran Navy officer, flying in space or diving to the ocean floor was more than a calling. In 1959, soon after being chosen one of NASA's pioneering seven astronauts, Carpenter wrote about his hopes, concluding: "This is something I would willingly give my life for."

"Curiosity is a thread that goes through all of my activity," he told a NASA historian in 1999. "Satisfying curiosity ranks No. 2 in my book behind conquering a fear."

Even before Carpenter ventured into space, he made history on Feb. 20, 1962, when he gave his Glenn sendoff. It was a spur of the moment phrase, Carpenter later said.

"In those days, speed was magic because that's all that was required ... and nobody had gone that fast," Carpenter explained. "If you can get that speed, you're home-free, and it just occurred to me at the time that I hope you get your speed. Because once that happens, the flight's a success."

Three months later, Carpenter was launched into space from Cape Canaveral, Fla., and completed three orbits around Earth in his space capsule, the Aurora 7, which he named after the celestial event. It was just a coincidence, Carpenter said, that he grew up in Boulder, Colo., on the corner of Aurora Avenue and 7th Street.

His four hours, 39 minutes and 32 seconds of weightlessness were "the nicest thing that ever happened to me," Carpenter told a NASA historian. "The zero-g sensation and the visual sensation of spaceflight are transcending experiences and I wish everybody could have them."

His trip led to many discoveries about spacecraft navigation and space itself, such as that space offers almost no resistance, which he found out by trailing a balloon. Carpenter said astronauts in the Mercury program found most of their motivation from the space race with the Russians. When he completed his orbit of the Earth, he said he thought: "Hooray, we're tied with the Soviets," who had completed two manned orbits at that time.

Things started to go wrong on re-entry. He was low on fuel and a key instrument that tells the pilot which way the capsule is pointing malfunctioned, forcing Carpenter to manually take over control of the landing.

NASA's Mission Control then announced that he would overshoot his landing zone by more than 200 miles and, worse, they had lost contact with him.

Talking to a suddenly solemn nation, CBS newsman Walter Cronkite said, "We may have ... lost an astronaut."

Carpenter survived the landing that day.

Always cool under pressure — his heart rate never went above 105 during the flight — he oriented himself by simply peering out the space capsule's window. The Navy found him in the Caribbean, floating in his life raft with his feet propped up. He offered up some of his space rations.

Carpenter's perceived nonchalance didn't sit well some with NASA officials, particularly flight director Chris Kraft. The two feuded about it from then on.

Kraft accused Carpenter of being distracted and behind schedule, as well as making poor decisions. He blamed Carpenter for the low fuel.

On his website, Carpenter acknowledged that he didn't shut off a switch at the right time, doubling fuel loss. Still, Carpenter in his 2003 memoir said, "I think the data shows that the machine failed."

In the 1962 book "We Seven," written by the first seven astronauts, Carpenter wrote about his thoughts while waiting to be picked up after splashing down.

"I sat for a long time just thinking about what I'd been through. I couldn't believe it had all happened. It had been a tremendous experience, and though I could not ever really share it with anyone, I looked forward to telling others as much about it as I could. I had made mistakes and some things had gone wrong. But I hoped that other men could learn from my experiences. I felt that the flight was a success, and I was proud of that."

One of 110 candidates to be the nation's first astronauts, Carpenter became an instant celebrity in 1959 when he was chosen as a Mercury astronaut. The Mercury 7 were Carpenter, Glenn, L. Gordon Cooper Jr., Virgil I. "Gus" Grissom, Walter M. Schirra Jr., Alan B. Shepard Jr., and Donald K. "Deke" Slayton.

Like his colleagues, Carpenter basked in lavish attention and public rewards, but it wasn't exactly easy. The astronauts were subjected to grueling medical tests — keeping their feet in cold water, rapid spinning and tumbling and open-ended psychological quizzes. He had to endure forces 16 times gravity in his tests, far more than in space, something he said he managed with "great difficulty."

"It was the most exciting period of my life," he said.

Carpenter never did go back in space, but his explorations continued. In 1965, he spent 30 days under the ocean off the coast of California as part of the Navy's SeaLab II program.

"I wanted, No. 1, to learn about it (the ocean), but No. 2, I wanted to get rid of what was an unreasoned fear of the deep water," Carpenter told the NASA historian.

Inspired by Jacques Cousteau, Carpenter worked with the Navy to bring some of NASA's training and technology to the sea floor. A broken arm kept him out of the first SeaLab, but he made the second in 1965. The 57-by-12-foot habitat was lowered to a depth of 205 feet off San Diego. A bottlenose dolphin named Tuffy ferried supplies from the surface to the aquanauts below.

"SeaLab was an apartment but it was very crowded. Ten men lived inside. We worked very hard. We slept very little," Carpenter recalled in a 1969 interview. Years later, he said he actually preferred his experience on the ocean floor to his time in space.

"In the overall scheme of things, it's the underdog in terms of funding and public interest," he said. "They're both very important explorations. One is much more glorious than the other. Both have tremendous potential."

After another stint at NASA in the mid-1960s, helping develop the Apollo lunar lander, Carpenter returned to the SeaLab program as director of aquanaut operations for SeaLab III.

He retired from the Navy in 1969, founded his company Sea Sciences Inc., worked closely with Cousteau and dove in most of the world's oceans, including under the ice in the Arctic.

When the 77-year-old Glenn returned to orbit in 1998 aboard space shuttle Discovery, Carpenter radioed: "Good luck, have a safe flight and ... once again, Godspeed, John Glenn."

Malcolm Scott Carpenter was born May 1, 1925, in Boulder, Colo. (He hated his first name and didn't use it). He was raised by his maternal grandparents after his mother became ill with tuberculosis.

He attended the University of Colorado for one semester, joined the Navy during World War II, and returned to school but didn't graduate because he flunked out of a class on heat transfer his senior year. The school eventually awarded him a bachelor's degree in aeronautical engineering in 1962 after he orbited the Earth.

He rejoined the Navy in 1949 and was a fighter and test pilot in the Pacific and served as intelligence officer.

He married four times and had seven children; a daughter helped him write his memoir, "For Spacious Skies: The Uncommon Journey of a Mercury Astronaut." He also wrote two novels: "The Steel Albatross" and "Deep Flight." In addition to his children, he is survived by his wife, Patty Barrett.

A public funeral and memorial are planned for later this month in Boulder, Barrett said. She didn't have further details.

Is Malcom Scott your relative? Please don't go away!

ask our community of genealogists a question.
Sponsored Search by Ancestry.com
DNA Connections
It may be possible to confirm family relationships with Malcom Scott by comparing test results with other carriers of his ancestors' Y-chromosome or mitochondrial DNA. Y-chromosome DNA test-takers in his direct paternal line on WikiTree: 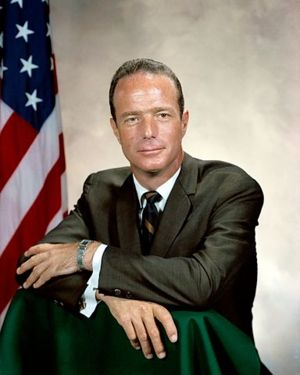 Malcom Scott is 20 degrees from Jaki Erdoes, 21 degrees from Wallis Windsor and 18 degrees from Henry VIII of England on our single family tree. Login to find your connection.