Edgar would join the CSA in 1861, and be assigned to the 38th Infantry, Company H. Edgar would rise from 1st Lieutenant to Captain when the previous company commander Captain Joseph M. Terry resigned in December of 1861.

Edgar Carrington married Mary E. Hannah on March 3, 1862 in Charlotte, but sadly, would be killed in action at the Battle of Seven Pines near Richmond less than 3 months thereafter.

Edgar Wirt Carrington's Findagrave page has links to seven of his siblings, including brother Abram Cabell Carrington, who died in the Battle of Frasier's Farm only a month after Edgar; June 30, 1862. His biography notes Abram was a Lieutenant, but does not say what unit.

Edgar's widow Mary Hannah Carrington would remarry in 1867 to Robert Boyd, and the 1880 census of Roanoke would show 3 of the couple's 7 children. Per the Findagrave page for Robert Boyd, he was a Civil War veteran serving in a Cavalry unit, but not specified in the biography. There are several records for CSA soldiers named Robert Boyd, one of which notes 22nd Cavalry.

The FamilySearch profile shows the Carrington family back to a Paul Carrington of Northern Ireland, born about 1625.

ask our community of genealogists a question.
Sponsored Search by Ancestry.com
DNA
No known carriers of Edgar's ancestors' DNA have taken a DNA test. 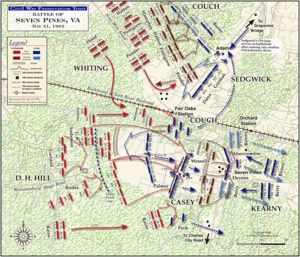 Edgar is 17 degrees from Danielle Liard, 13 degrees from Jack London and 12 degrees from Henry VIII of England on our single family tree. Login to find your connection.