Christopher Houston "Kit" Carson (b. December 24, 1809[1] – d. May 23, 1868) was an American frontiersman and Indian fighter. Carson left home in rural present-day Missouri at age 16 and became a mountain man and trapper in the West. Carson explored the west to California, and north through the Rocky Mountains. He lived among and married into the Arapaho and Cheyenne tribes. He was hired by John C. Fremont as a guide, and led 'the Pathfinder' through much of California, Oregon and the Great Basin area. He achieved national fame through Fremont's accounts of his expeditions. He became the hero of many dime novels.[1]

Carson was a courier and scout during the Mexican-American war from 1846 to 1848, celebrated for his rescue mission after the Battle of San Pasqual and his coast-to-coast journey from California to deliver news of the war to the U.S. government in Washington, D.C.. In the 1850s, he was the Agent to the Ute and Jicarilla Apaches. In the Civil War he led a regiment of mostly Hispanic volunteers at the Battle of Valverde in 1862. He led armies to pacify the Navajo, Mescalero Apache, and the Kiowa and Comanche Indians. He is vilified for his conquest of the Navajo and their forced transfer to Bosque Redondo where many of them died. Breveted a general, he is probably the only American to reach such a high military rank without being able to read or write, although he could sign his name.

Kit Carson's alliterative name, adventurous life, and participation in a large number of historical events has made him a favorite subject of novelists, historians, and biographers.[1]

Note: Christopher Carson married three times. His first two wives were American Indian and he never mentioned them in his memoirs. His third wife, Maria Josepha, was Mexican.[1]

Frontiersman, Explorer, and Civil War Brevet Brigadier General. He was known for his frontier skills and for his daring. Many people described him as brave, gentle, honest, and wise, but his most notable qualities were that he was humble, reverent, polite, ingenious, resourceful, respectful of all cultures, and loyal to his country. At five feet, five inches tall, 140 pounds, and slightly bow-legged, he was slow spoken, often spoke softly, and posed a great natural modesty.

Born Christopher Houston Carson in Madison County, Kentucky, his family moved to Boon's Lick, Missouri (near Arrow Rock), when he was a year old. He was a cousin to another famous frontiersman, Daniel Boone, through his mother.

His father, Lindsey Carson, was a veteran of the American Revolution, and decided the nickname "Kit" fit his son better than his given name, and it stuck. On the Missouri frontier, Indians were a constant problem, and as a result, formal schooling took second place to survival skills. As a result, Carson never learned to read or write.

When Kit was nine, his father was killed by Indians, and his mother remarried. He and his stepfather never agreed, so in 1824, his stepfather apprenticed the 14 year-old to a saddle maker, David Workman, in nearby Franklin, Missouri. Hating the work, in 1826 he ran away to join a group of traders going to Santa Fe, New Mexico.

From 1829 to 1841, he trapped beavers from Arizona to Idaho, and along the Rocky Mountains; during these trips, he often fought the local Indians.

In 1842, John C. Fremont,the famous explorer, hired Carson to guide him through the Rockies and Fremont highly praised Carson in his official reports, which helped make him famous. Carson then joined Fremont's second and third expeditions,establishing trails to California and to Oregon. In 1846, Carson joined Fremont's group that revolted against the Mexicans, and after several victories, went to carry the news to Washington DC, but at Socorro, New Mexico, he joined General Stephen Kearny's troops and led them back to California.

When the Civil War began in 1861, Carson was made Colonel of the New Mexico Volunteer Regiment, and fought the Confederates at Valverde, New Mexico in 1862, when the Confederates sent an Army from Texas to seize California. When the Confederates retreated back to Texas,and over the next three years, Carson fought Indians, including the Apaches, Navajos, Kiowas, and Commanches, forcing many of the Indians to accept living on reservations.

Carson was fluent in English, French, Spanish, and in a number of Indian languages, include the common sign language used by mountain men. Spanish was the preferred language in the Taos, New Mexico home of his third wife, Josefa.

In 1865, a grateful US government made him a Brevet Brigadier General for his services to the Union, and he was given command of Fort Garland, Colorado in 1866. The next year, he resigned due to poor health, and died within eight months at Fort Lyon, Colorado, in the quarters of Assistant Army Surgeon H. K. Tilden, when an aneurysm ruptured in his trachea. Carson was transported to Boggsville, and buried beside his third wife, Josefa, who had died in childbirth a month earlier. A year later, both bodies would be taken to the Kit Carson Cemetery,Taos, New Mexico, for their final burial.[2][3]

Sponsored Search by Ancestry.com
DNA Connections
It may be possible to confirm family relationships with Kit by comparing test results with other carriers of his Y-chromosome or his mother's mitochondrial DNA. Y-chromosome DNA test-takers in his direct paternal line on WikiTree: It is likely that these autosomal DNA test-takers will share some percentage of DNA with Kit: 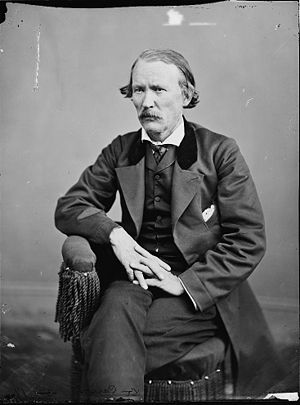 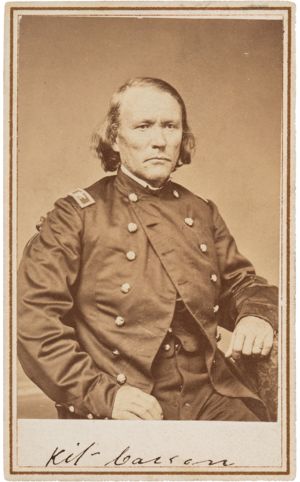 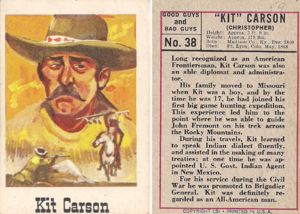 Randall Merriott
I just finished reading this very well-researched book. I recommend it for anyone interested in Kit Carson. There were many myths about Carson. The author does his best to find the truth.

posted Sep 04, 2020 by Randall Merriott
William Kuhn
My maternal grandmother was Ruby Carson. I am named William after Fiddlin John William Carson and was told we were direct blood descendants of Kit Carson. That was in the 1970's.

Then I read this from above:

"Frontiersman, Explorer, and Civil War Brevet Brigadier General. He was known for his frontier skills and for his daring. Many people described him as brave, gentle, honest, and wise, but his most notable qualities were that he was humble, reverent, polite, ingenious,resourceful, respectful of all cultures, and loyal to his country. At five feet, five inches tall, 140 pounds, and slightly bow-legged, he was slow spoken, often spoke softly, and posed a great natural modesty. "

I am 5'7" 140 pounds , slightly bowlegged. Personality traits a dead on match. And I love being alone in nature.

posted Mar 20, 2020 by William Kuhn
Chet Ogan
Fremont with Carson did not revolt against the Mexicans, members of the Bear Flag Revolt were the ones who revolted. Fremont with Carson were forced to side with the revolters to save their lives. Unfortunately Fremont was not completely local politics which resulted in General Vallejo, in favor of California becoming part of United States being held prisoner for a few weeks.

As a result, an almost bloodless revolution took place throughout California. Kit Carson was returning to the east with dispatches when General Kearney persuaded him, under threat of court marshall, to return with him as a guide to the San Diego area. As a result the bloodiest battle of the Mexican War in California took place near peaceful San Pasqual.

posted Oct 29, 2018 by Chet Ogan
Chet Ogan
The statement "In 1846, Carson joined Fremont's group that revolted against the Mexicans, and after several victories, went to carry the news to Washington DC, but at Socorro, New Mexico, he joined General Stephen Kearny's troops and led them back to California." bears some questionable statements. John C. Fremont, with Kit Carson in the company, was exploring and mapping routes in south central Oregon when a government dispatcher brought Fremont an urgent message that war had broken out between United States and Mexico. Fremont was requested to return to California to protect US citizens living in California whose lives and families were being threatened by a rogue unit of Californios composed partly of ruffians and convicts.
posted Oct 29, 2018 by Chet Ogan