Charlton Heston was an Academy Award winning American actor and political activist, starring in nearly 100 films, and best known for his roles in Ben-Hur, "The Ten Commandments", and "Planet of the Apes".[1][2][3]

John Charles Carter was born 4 October 1923, the son of Lila Charlton and Russell Whitford Carter, a sawmill operator.[2][4][5] Many sources indicate he was born in Evanston, Illinois.[5] Heston's autobiography, however, and some other sources, place his birth in No Man's Land, Illinois, which usually refers to a then-unincorporated area now part of Wilmette, a wealthy northern suburb of Chicago. Heston was partially of Scottish descent, including from the Clan Fraser, but the majority of his ancestry was English. When Heston was 10 years old, his parents divorced.[1][3] Shortly thereafter, his mother married Chester Heston and the new family moved back to Wilmette.[6] Lila and the two young Carter children took on their step-father's surname.[3][2][6]

Charlton married fellow Northwestern University student Lydia Marie Clarke in 1944, after returning from serving in the Aleutian Islands in the Air Force.[3][2][7] They had one son, Fraser Clarke Heston, and adopted one daughter, Holly Ann Heston.[2]

Charlton became John's name of choice once he started acting.[2] It was his mother's maiden name.[2] Charlton's big break came in his Broadway debut in "Antony and Cleopatra" in 1947.[2] The role set the pace for his future roles, where his deep baritone vocals would be appropriate, especially in historical dramas.[2] He won an Oscar for Best Actor for his role as "Ben-Hur" in 1959.[2] Charlton was known for his devotion to roles, insisting on playing Moses barefoot and memorizing chunks of the Bible; learning to drive a chariot and doing so about 80% of the time for Ben-Hur; and spending hours learning to sculpt and paint for the role of Michelangelo.[3]

From 1965 to 1971, Charlton served as the president of the Screen Actors Guild.[2] He also helped create the American Film Institute, as well as being a supporter of the National Foundation for the Endowment of the Arts.[2]

In addition to acting, Charlton was an activist.[2] He supported Martin Luther King, Jr in his civil rights protests, and later received the Presidential Medal of Freedom from President George W. Bush in 2003 for his role, as well as his accomplishments in acting.[2]

Charlton (Carter) Heston was awarded the Presidential Medal of Freedom.

Charlton Heston died on April 5, 2008, at his home in Beverly Hills, California, with Lydia, his wife of 64 years, by his side.[3][2][8] He was survived by Lydia, as well as their children.[2] A month later media outlets reported his death was due to complications with pneumonia, likely complicated by his Alzheimer's disease.[2]

Sponsored Search by Ancestry.com
DNA
No known carriers of Charlton's DNA have taken a DNA test. 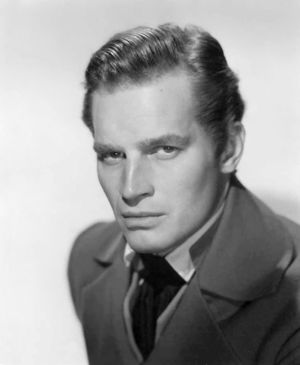 Leave a message for others who see this profile.
There are no comments yet.
Login to post a comment.
David McGee
Why is his wife listed as [private wife (unknown - unknown)] when her full name is given in the biography - Lydia Marie Clarke in 1944?
posted Mar 30, 2018 by David McGee