He was the son of Charles Cashion and Lula Howard. He passed away in 1986.[1] 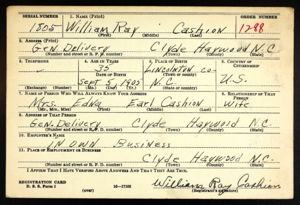 William is 21 degrees from Cecil B. DeMille, 24 degrees from Rosalie Neve and 18 degrees from Henry VIII of England on our single family tree. Login to find your connection.