Pierre was born on 11 May 1816 at Sainte Marguerite de Blairfindie, L'Acadie, Quebec, CanadaBas-Canada/Lower Canada. The son of Alexis Castagne and Marguerite Boulé.

Pierre marries Placide Flavie Gauthier (dit Larouche) in Jan 1843 in Ste-Marguerite-de-Blairfindie, L'Acadie, Bas-Canada/Lower Canada. Together, they have at least 6 children:

It is unknown when and where Pierre died.

Where, Oh where did Peter go?

Pierre and Placide Flavie are an interesting couple. Clearly Pierre is active in the Iberville notorial transaction during the time frame of late 1830-late 1840. There are numerous transactions noted with his brothers, his father, and the various people of Iberville/Napierville at the time. We see Cesarie/Sarah born in 1844 at St-Cyprien, Napierville. Marie born 1845. Sophie is born and dies early. 1847. Pierre 1849. Anna Olympe 1850 (named after Flavie's sister), and finally Frank (Xavier) is born in 1854, just after the move to Roxton Falls. (Francois Xavier also becomes yet another Frank Castine, by the way). We see there are at least x2 topographical elements that could be associated with our family in Roxton Falls. One is la Ruisseau Castagne (the Castagne stream), and the other is a bog, la Tourbiere de Castagne (now called la Tourbiere de Saint-Joachim-de-Shefford). There is a possibility that either of these are named after Pierre or his descendants.

So after 1854 Roxton Falls, there is nothing. PIerre is gone. By 1861, we see son Pierre jr. and daughter, Marie, living with grandpa Alexis Castagne. Sarah is already married in 1860 to Pierre "Peter" Louis Auger dit Lemaitre. By 1871, we see Flavie living with her father, and children Anna and Frank, in Roxton Falls. By 1880, we see that Flavie has moved down to Merrimack, New Hampshire and is living with daughter Sarah and Pierre Auger. We also see Flavie has the marital status of "Widowed".

So where, o where, did Pierre go? Remember the article by old Trapper-Scout Frank Stay from Minnesota? At the time, I was willing to dismiss it due to shear distance. I stated that it was probably a Castonguay or a Castagnier back then. BUT. When we start to research the dissapperance of Pierre Castagne, we see that the timelines do, in fact, match. Frank says that he and partner Andre Larocque (Rock) we there in 1858. The article states that he met a French-Canadian, named Pierre Castagne, there with his Sioux wife. Frank mentions that Castagne was there for an 8 year period, but he never said when that period started. With this new theory in mind. It is very conceivable that Pierre may have abondoned the family after the birth of Francois-Xavier in Roxton Falls (1854). He could, indeed, be the same Pierre in the Minnesota story. More research and probably some DNA analysis from any offspring, could add more credit to this. Also since the majority of Pierre's offspring were also called the Castine's. It is possible that I may need to research Pierre under the name of Peter Castine. MC Sep2020

ask our community of genealogists a question.
Sponsored Search by Ancestry.com
DNA Connections
It may be possible to confirm family relationships with Pierre by comparing test results with other carriers of his Y-chromosome or his mother's mitochondrial DNA. Y-chromosome DNA test-takers in his direct paternal line on WikiTree: It is likely that these autosomal DNA test-takers will share some percentage of DNA with Pierre: 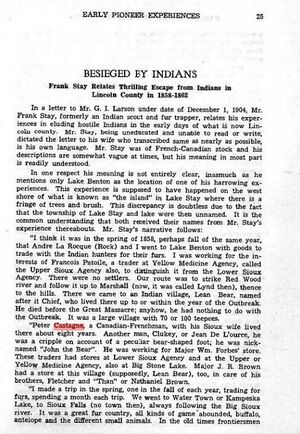