Alfonso X Castilla was a member of the aristocracy in Europe.

Alfonso X (also occasionally Alphonso X, Alphonse X, or Alfons X), 23 November 1221 – 4 April 1284, called the Wise (Spanish: el Sabio), was the King of Castile, León and Galicia from 30 May 1252 until his death. He was of the House of Ivrea, a medieval Frankish dynasty of Burgundian origin which rose to prominence in Italy in the tenth century, even briefly holding the Italian throne. They also ruled the County of Burgundy in the eleventh and twelfth centuries. A cadet branch ruled the Kingdom of Galicia from 1111 and the Kingdoms of Castile and León from 1126 until 1369.

Born in Toledo, Spain, Alfonso was the eldest son of Ferdinand III of Castile and Elizabeth (Beatrice) of Swabia. His mother was the paternal cousin of Holy Roman Emperor Frederick II. His maternal grandparents were Philip of Swabia and Irene Angelina. For the first nine years of his life he was only heir to Castile until his father succeeded his own father Alfonso IX of Leon and united the kingdoms of Castile and Leon. Alfonso succeeded his father as King of Castile and León in 1252.

ALFONSO X OF CASTILE-LEON, King of Castile, Leon, Toledo, Galicia, Seville, Cordoba, Murcia, Jaen. and the Algarve, Knt., son and heir by his father's 1st marriage, born at Toledo 23 Nov. 1221. He married at Valladolid 26 Nov. 1248 VIOLANTE (or YOLANDA) OF ARAGON. She was born about 1236. They had five sons, and six daughters. By his mistress, MAYOR GUILLEN DE GUZMAN (died at Alcocer before 1267), he had one illegitimate daughter, Beatris (or Beatriz) Alfonso. By various other mistresses, he also had three illegitimate sons, and two illegitimate daughters. Alfonso was elected King of the Romans in 1257-72. ALFONSO X, King of Castile, Leon, etc., died at Seville 4 (or 21) April 1284. His widow, Violante, died at Roncesvalles in 1300.

Is Alfonso X your ancestor? Please don't go away!

ask our community of genealogists a question.
Sponsored Search by Ancestry.com
DNA
No known carriers of Alfonso X's DNA have taken a DNA test. 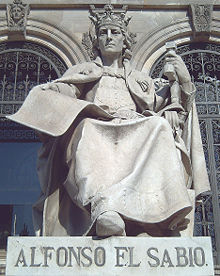 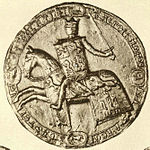 Robert Wood
Of Castile-84 and Castilla-113 appear to represent the same person because: they have the same parents, same siblings, same birth, same death.
posted May 17, 2017 by Robert Wood
John Macdonald
often known as El Sabio(the wise) and referred to in many histories simply by that name. Is also ancestor of many hidalgo families in Spain
posted Jan 05, 2017 by John Macdonald