Isabella I (Castilla) de Castilla y León is a member of the House of Trastámara.

Isabella I was born 22 April 1451 in Madrigal de las Altas Torres to King (Juan) John II Castilla and Isabella of Portugal.[1] King John II died when Isabella was only four, leaving the crown to her older half brother, Henry IV.[1] Isabella of Portugal took her children, Isabella and Alphonso, to Arevallo where she dedicated herself to their education and development.[1]

From an early age, Isabella favored elegant gowns and jewelry, accenting her naturally beautiful blue eyes, figure, and reddish-chestnut hair.[2][1] Education was also important to Isabella.[2] She learned Latin at the age of 35, insisted on schools supported by her court to educate young men of the country, and made sure her own children were well educated, as well.[2][1]

When Isabella was 16, in order to try to mend a Spain torn by civil war, Henry IV tried to marry his sister to the leader of the opposing faction.[1] This terrified Isabella to the point of her threatening suicide, but she was saved when the proposed bridegroom died.[1] At 17, she was offered an opportunity at the crown, but declined, insisting to wait until it was rightfully hers at her brother's death.[1]

Isabella instead was wed to Fernando II of Aragon,19 October 1469 in Spain, without the consent of Henry IV, which had been required.[1] At that time the Aragónese crown included the kingdoms of Majorca, Sardinia and Valencia, as well as the Principality of Catalonia. Henry died December 1474, and two days later, Isabella declared herself Queen of Castile.[1]

The children of Isabella and Ferdinand included:

When Isabella took the throne, her country was torn by the lack of skill Henry had ruled with.[1] This, coupled with support by some of her niece, Jane, as supposed Queen, made for a difficult several years.[1] Isabella saw an opportunity, though, to change a land where nobles and feudal lords had more power than the monarchy, and started to employ the efforts of local mercenaries, the Santa Hermanadad, to restore order and give protection to her citizens.[1] The actions served to turn people's loyalty to the crown and country instead of local nobility, as well as restoring land and wealth back to the crown.[1] She even convinced the Pope of the Roman Catholic Church that she should appoint Spanish Bishops instead of his own council doing so, in order to best serve the country.[1]

Due to how often Isabella travelled, she was highly recognizable for the era she reigned.[3]

Isabella and Ferdinand fought to unite Spain under their Catholic monarchy, and dispel the Moors who had been ruling Granada.[3][2]Their conquest to do so began in 1481, equating heresy to the Catholic Church to be the same as treason to Spain.[3] Once the region was conquered in 1492, everyone was directed to convert to Christianity or leave, despite earlier promises of religious tolerance.[3][2] A witch hunt ensued, fueled by the already present Inquisition, to sniff out those who claimed to have converted and didn't.[3][1]

Of note to many Westerners was Isabella's funding of Christopher Columbus' expedition to explore the New World, and claim it for Spain.[2][1] This was typical of Isabella and her desire to grow her kingdom and wealth, but also not something Ferdinand supported.[2][1] Without her support, the expedition likely would never have happened.[2]

Isabella I, Queen of Castille and Leon, died 26 November 1504 at Castillo de la Mota, Medina del Campo, Valladolid, Espana.[3] Her death was preceded by 50 days of prayers and intercession in hopes the monarch would survive the high fevers and dropsy plaguing her.[3] She had written her will, signing it October 12th, and adding a codicil November 23rd asking for kindness toward the natives in the Americas.[3] She was interred at the Franciscan Monastery at Alhambra where Ferdinand was later interred in 1516.[3][2][1] 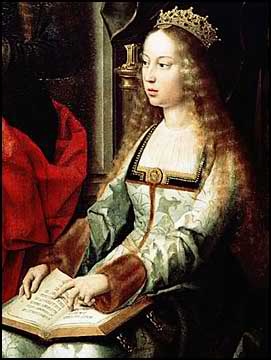 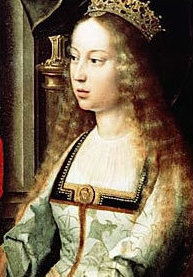 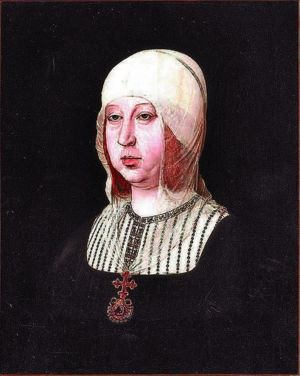 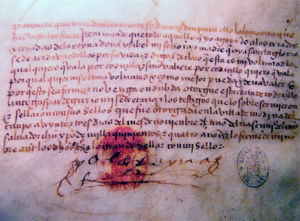 Wedding Portrait of Ferdinand and Isabella 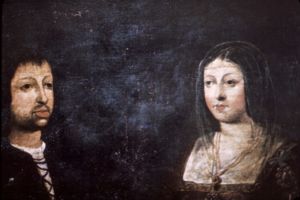 Robin Lee
Queen of Castile-3 and Castilla-121 appear to represent the same person because: merging into correct name and profile with correct dates
posted Aug 21, 2019 by Robin Lee