Pedro I Castilla was a member of the aristocracy in Europe.

Peter was the last ruler of the main branch of the House of Ivrea. House of Ivrea Family Tree: https://en.m.wikipedia.org/wiki/Anscarids

"Popular memory generally views Peter as a vicious monster. Much but not all of Peter's reputation comes from the works of the chronicler Pero López de Ayala, who after his father's change of allegiance had little choice but to serve Peter's usurper. After time passed, there was a reaction in Peter's favour and an alternative name was found for him. It became a fashion to speak of him as El Justiciero, the executor of justice (the Lawful). Apologists were found to say that he had killed only men who would not submit themselves to the law or respect the rights of others." [1]

Peter had a daughter with Teresa de Ayala, a niece of Pero Lopez de Ayala:

Peter had a son with Isabel de Sandoval:

Is Pedro I your ancestor? Please don't go away!

ask our community of genealogists a question.
Sponsored Search by Ancestry.com
DNA
No known carriers of Pedro I's DNA have taken a DNA test.

Images: 1
Praying statue of Peter I of Castile. 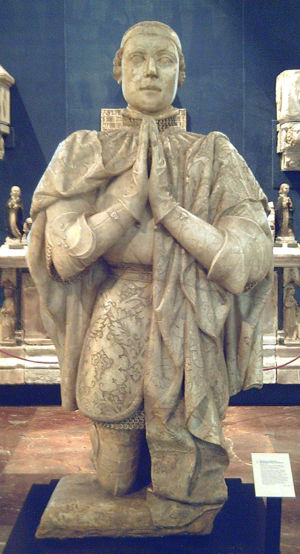 Leave a message for others who see this profile.
There are no comments yet.
Login to post a comment.
[Living Sälgö]
.
posted Oct 03, 2016 by [Living Sälgö]

Pedro I is 22 degrees from Donald Howard, 17 degrees from Julia Howe and 6 degrees from Henry VIII of England on our single family tree. Login to find your connection.

Categories: House of Bourgogne | War of the Two Peters | Castilian Civil War | Battle of Nájera | This Day In History April 03