Jacques or Jacob caudebec was an early settler in the Minisink Valley. The "Minisink Valley or Minisink country" consists of the valley of the Neversink, west of the Shawangunk Mountains, and the Delaware valley, as far as the Delaware Water Gap. The first settlements of which authentic knowledge can be ascertained were made about 1690, at what was later called the Upper Neighborhood, near Cuddebackville. A few years later more families came, and the settlements stretched further down the Neversink valley, to the junction with the Delaware; in later years the valley between Huguenot and Port Jervis was known as the Lower Neighborhood. The Neversink river was then called the Machackemeck, and the valley between Cuddebackville and Port Jervis was often spoken of as Peenpack. The earliest Patents in this neighborhood were the Waghaghkemeck* Patent, Oct. 14, 1697; the Minisink Patent, Aug, 28, 1704, which confirmed the Indian deed of 1702, and several other patents of less importance, which need not be enumerated here. The Waghaghkemeck* Patent was granted to Jacob Cuddeback, Thomas Swartwout, Anthony Swartwout, Bernardus Swartwout, Jan Tys, Peter Guimar and David Jamison. The settlers in the Minisink valley were Dutch, French Huguenots and English. [1].

He resided in the region Pays de Caux, Haute-Normandy in northern France, on the Bolbec from May 31 1664 to 1685, or, possibly in Caudebec-les-Elbuef a textile manufacturing town in the department of Seine-Inf Crieure, .

Note
There are two communes known as "Caudebec". Caudebec-en-Caux and "Caudebec-les-Elbuef", Seine-inf-Crieure, which is located on the south side of the Seine, about 40 miles south east of Bolbec and Caudebec-en-Caux. This commune is not in the Pays de Caux (the chalk plateau north of the Seine River), but rather in Pays de Bray (the marsh land located south of the Seine River). Seine-inf-Creure was a major textile area until the emigration of the Huguenots after the revocation of the Edict of Nantes, on October 22, 1685, by Louis XIV, the grandson of Henry IV. This drove an exodus of Protestants, and increased the hostility of Protestant nations bordering France. Just a few days into the following year, on 17 January 1686, King Louis XIV proudly announced that from a population of nearly 900,000 Huguenots only 1000 or so remained living France. He was quite pleased until a severe dent in the country’s income was explained to him. Holland and England began exporting Hats to France.

French Heritage monument to Lintot...Temple closed,
Description: Ground floor masonry, floor in wood shingles or coated pan. Seating an alternating brick and Flint barn. Outbuildings in timber. Charretterie frame. In 1578 the protestant worship is celebrated in Lintot by Pastor Vallandry, and then by the pastors of the Montrcriquet temple. In 1595 the Hague, sieur de the Moissonniere stone creates a sermon in his mansion. In 1623 Lintot protestants buy 200 pounds of sieur tare a barn, that they carry on a piece of land given by the sieur de Lintot, to build a sermon in lieu of his mansion. In 1639, the Council banned the temple of Montrcriquet, destroyed in 1659. Is then built the barn a temple, called the magnificent, despite opposition from the parish priest remonstrant is located at 54 toises of the Church and its cemetery and that the said temple voice disturb the divine office. A decision of the Parliament of Normandy from 10 March 1681 condemns the temple door is walled, but the building is not destroyed. It is transformed in 1702 (date range) in logis de farm, accompanied by agricultural buildings. Carousel barn is built in the middle of the 19th century.[2][3]

The surname "Cuddebec" suggests that Jacques' ancestor was born either in the tiny fortified commune Cuddebec-en-Caux, which is located about 12 miles to the southeast of Bolbec on the Seine River or possibly "Caudebec-les-Elbuef" about located 40 miles to the southeast.. Bolbec was a woolen textile center with mills and weaving houses, and Caudebec-en-Caux, at the time of the Huguenots was the felt hat center of France. Today Caudebec-en-Caux produce lace in a cottage industry, and lives off tourism. Bolbec, Caudebec-en-Caux and Caudebec-les-Elbuef were textile centers populated by Huguenot textile workers, until the exodus to Holland commencing in the 1600s. After the exodus the Textile industry of northern France collapsed[4].

He is said to have emigrated first to England, then to Maryland and finally to New York. It is thought that he worked for Benjamin Provoost in New York, New York[6].

Jacques Caudebec was father of [8]

James Caudebec born 7 July 1708 in Kingston, Ulster Co., New York [nothing found at KRDC. NYRDV or Minisink RDC] Nothing supporting the existence of this child found. James is the English translation for Jacques, Jacob or Jacobus. This child is probably Jacob Coddebek, bp. on 7 July 1706 at New York City.

To all Christian People to whom this present writing shall or may come Jacob Codebec of Wagachkameck in the county of Ulster[22] and Province of New York In America Sendeth Greeting Now know ye that the said Jacob Codebec for divers good causes and and considerations him thereunto moving, but more & especially for and in consideration of the sum of 170 pounds currant money of the province of New York to him in hand paid or secured to be paid by his three eldest children. That is to say the three eldest sons by name Benjamin William and Jacobus, the receipt whereof he the said Jacob Codebec doth hereby acknowledge and thereof and therefrom and of and from every part & parcell thereof doth acquit exhonerate release and forever discharge the said Benjamin William and Jacobus Codebec their heirs executors and administrators and every of them firmly by these presents have given granted bargained sold released ratified confirmed and by these presents doe fully freely clearly and absolutely give grant bargaine & sell release ratify & confirm unto the said Benjamin William & Jacobus Codebec their heirs and assignes for ever all that certain tract or parcell of land situate being and lying in the county of ulster at Wackachkemeck being one just seventh part of 1200 acres of land.

Said Jacob Codebec stands entitled (?) and possessor? by virtue of a patent from Governor Benjamin Fletcher. Relation thereunto had may more fully & at large appear.

The said Benjamin William and Jacob paying the yearly quit due upon said lands then this deed of bargaine and saile to be in full power and virtue.

In testimony whereof the said Jacob Codebec has hereunto set his hand and affisced his seale this 15 day of February in the 12 year of his majesties Reigne Annoq Dom 1725/6.

The word (the 14th inst) was interhned between the 26th & 27th lines before execution of the presents. J Codebec SS Sealed and delivered in the presence of us Joseph Wheeler Jno Crooke June Jacobus Swartwout Jr.

Cuddebackville – A hamlet at the intersection of US-209 and NY-211, located about ten miles north of Machackemeck (now Port Jervis). Deerpark, Orange, NY. Godeffroy is a small hamlet south of Cuddebackville on US-209.

Jacob Caudebec was born 1670 in Caudebec, Normandy, France. He married Margareta Provoost on the 21st of October 1695, in most likely Kingstowne, Ulster County, New York. Their marriage date is listed in the Netherlands Marriage Index, but they are not listed in the Kingston Dutch Reformed Church Registers. And according to the Netherlands Marriage Index they were married and NDG or New Amsterdam - New York. At the time, Jacob was a resident of Esopus, Ulster County, New York, while Margareta Provoost was a resident of Kingstowne.

The Union of Jacob Caudebec and Margareta Provost brought these children into the world. 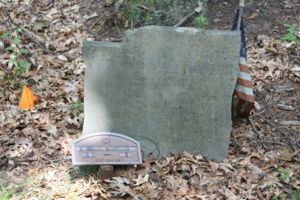 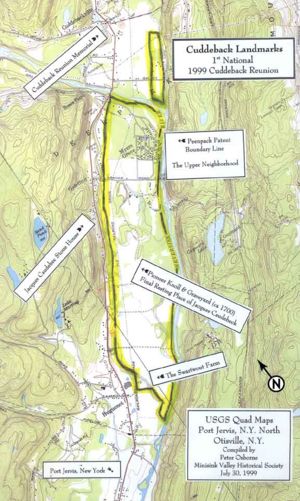 Baptism for Maria, daughter of Jacob Coddebeck and Margaret Provoost 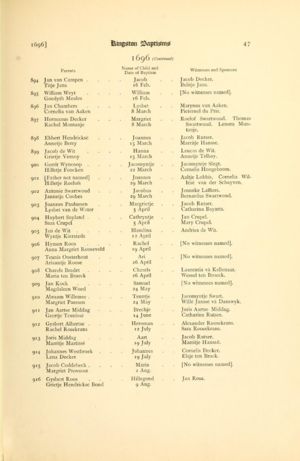 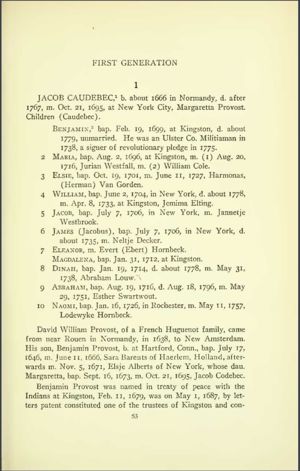 Linda (Lisher) James
Caudebec-28 and Caudebec-2 appear to represent the same person because: the 2 profiles should be merged. They should be merged into the smaller number profile and the parents listed on Caudebec-28 should be the parents listed on the final profile. Thank you..
posted Dec 04, 2015 by Linda (Lisher) James
Tom Quick
Caudebec-28 and Caudebec-2 appear to be duplicates. Resolution of fathers will be necessary. They are now an unmerged match.
posted Nov 23, 2015 by Tom Quick

Linda (Lisher) James
This message was sent to me by email. Does anyone know if this is true or not I have been looking. Nov 18 at 5:09 PM

The following was sent via the private messaging system on WikiTree.com. dear ms. james: are you sure Jacques caudebec was born in bolbec pays d' caux, and if so, would you kindly tell me where you got this information? I am a direct descendent of Jacques, have a book written about cuddebacks in America, and it states he was born in caudebec en caux. thank you for reading my message and I look forward to your response, guy peirce cuddeback