Parents: Gérard Cauvin, Jeanne le Franc. His father, Gérard Cauvin, had a prosperous career as the cathedral notary and registrar to the ecclesiastical court. He died in his later years, after suffering two years with testicular cancer. His mother, Jeanne le Franc, was the daughter of an innkeeper from Cambrai. She died a few years after Calvin's birth from an unknown cause.

French theologian John Calvin was born in Noyon, Picardy (1509). He was the fourth of five sons, and was born into a family of modest means. His father — who was a notary — had a good relationship with one of the local nobles. The nobleman allowed John to be educated along with his own children. Calvin studied law and Greek in addition to theology, and he was influenced by secular Humanists, especially Erasmus. He did so well in his studies that the Catholic Church awarded him a benefice, or stipend, when he was 12; he received another one when he was 14. He completed his master's degree at the Collège de Montaigu in Paris by the time he was 18.

He experienced a religious epiphany sometime between 1528 and 1533, when, he said, "God subdued my soul to docility by a sudden conversion." His father, who had insisted that Calvin study law, died in 1531, leaving the son free to pursue a spiritual path. He cut all ties with the Catholic Church and embraced Protestantism at a time when that was a dangerous thing to do; in 1534, two dozen Protestants were burned at as heretics in France. Calvin took up a nomadic lifestyle for the next several years, traveling throughout France, Italy, and Switzerland.

He was the leader of the second generation of Protestant reformers, following the lead of Martin Luther. But where Luther was passionate, Calvin was rational and unemotional. He approached theology with the coolheadedness of an intellectual. In 1536, Calvin published Institutes of the Christian Religion; it was intended for a general readership and answered basic questions about the foundations of Protestantism. The book was popular and sold out within a year. Word got around, and he made a name for himself among religious reformers. When he passed through Geneva, the pastor of the city urged him to stay around awhile and help with the new church. William Farel, the pastor, wouldn't take "no" for an answer, and even threatened to put a curse on Calvin if he refused. Calvin stayed for a year and a half, and although Geneva was ripe for religious reform, there was still conflict between Calvin, who wanted to install a theocracy, and those who wanted less drastic reform. Calvin was driven out of the city and went to Strasbourg. He returned three years later, and he spent the rest of his life in Geneva. He ran a strict regime; during his first five years there, he outlawed all art except for music, and that had to be vocal only — no instruments. He exiled 76 people and executed 58 for impiety, dissent, and heresy. Some people set their dogs on him, or sent him death threats, or went out of their way to disrupt his sermons. Even when his health began to fail, he carried on his work, saying, "What! Would you have the Lord find me idle when He comes?"

Calvin died in 1564 and was buried in an unmarked grave at his own request, to avoid tempting anyone into idolatry. Geneva became the center of European Protestantism and gave rise to several Protestant movements over the years: Scottish Presbyterians, English Puritans, and Dutch Reformed Protestants. The foundations of Calvinism can be spelled out with the acronym TULIP: Total depravity, Unconditional election, Limited atonement, Irresistible grace, and Perseverance of the saints. Calvin and his followers believed that every person deserves damnation, because we are all hopeless sinners, but God in his mercy has chosen some for salvation. If you are not chosen, nothing you can do will earn you salvation; if you are, nothing you can do will take that salvation from you.

ask our community of genealogists a question.
Sponsored Search by Ancestry.com
DNA
No known carriers of Jean's ancestors' DNA have taken a DNA test. 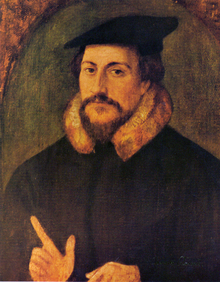