Countess of Strathmore and Kinghorne

She was born in Belgravia, Westminster, the eldest daughter of the Rev. Charles Cavendish-Bentinck (grandson of British Prime Minister William Cavendish-Bentinck, 3rd Duke of Portland) and his wife, Louisa (née Burnaby).

The Strathmore estates included two grand houses and their surroundings: Glamis Castle and St Paul's Walden Bury. Cecilia was a gregarious and accomplished hostess who played the piano exceptionally well. During World War I, Glamis Castle served as a convalescent hospital for the wounded, in which she took an active part until she developed cancer and was forced into invalidity. In January 1923, her youngest daughter, Elizabeth, married the King's son, Prince Albert, Duke of York, later George VI, the following January.

Sponsored Search by Ancestry.com
DNA
No known carriers of Cecilia's DNA have taken a DNA test. 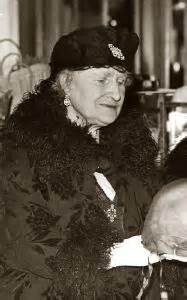