Miguel de Cervantes Saavedra; 29 September 1547 (assumed) – 23 April 1616), was a Spanish writer who is highly regarded as perhaps the greatest writer in the Spanish language and one of the world's pre-eminent novelists. His major work, Don Quixote, considered to be the first modern novel,

It is assumed that Cervantes was born in Alcalá de Henares, a Castilian city about 35 kilometres (22 mi) northeast from Madrid, probably on 29 September (the feast day of Saint Michael the Archangel) 1547. The probable date of his birth was determined from records in the church register, given the tradition of naming a child after the feast day of his birth. He was baptized in Alcalá de Henares on 9 October 1547.

Miguel's father, Rodrigo, was a barber-surgeon of Galician extraction from Córdoba, who set bones, performed bloodlettings, and attended "lesser medical needs"; at that time, it was common for barbers to do surgery, as well. His paternal grandfather, Juan de Cervantes, was an influential lawyer who held several administrative positions. His uncle was mayor of Cabra for many years. His mother, Leonor de Cortinas, was a native of Arganda del Rey and the third daughter of a nobleman, who lost his fortune and had to sell his daughter into matrimony in 1543. Leonor died on 19 October 1593.

While April 23, 1616 was recorded as the date of his death in some references, and is the date on which his death is widely commemorated (along with that of William Shakespeare), Cervantes in fact died in Madrid the previous day, April 22. He was buried on 23 April, in the neighboring Convent of the Barefoot Trinitarians, in central Madrid.

Is Miguel your ancestor? Please don't go away!

ask our community of genealogists a question.
Sponsored Search by Ancestry.com
DNA
No known carriers of Miguel's DNA have taken a DNA test. 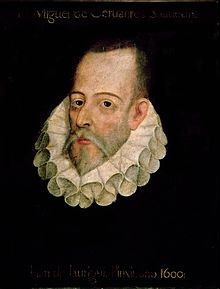 Leave a message for others who see this profile.
There are no comments yet.
Login to post a comment.
Isaac Taylor
His wife:

Does anyone have her Salazar ascents?