He succeeded Pope Julius III. Before his accession as pope he had been Cardinal-Priest of Santa Croce in Gerusalemme. He is the most recent pope to choose to retain his birth name as his regnal name upon his accession, as well as only the second and most recent pope to date to take the name "Marcellus" upon being elected. After his death, it would be 423 years before another pope would choose a name with an ordinal number less than IV (John Paul I).[2]

Is Marcello your ancestor? Please don't go away!

ask our community of genealogists a question.
Sponsored Search by Ancestry.com
DNA
No known carriers of Marcello's ancestors' DNA have taken a DNA test. 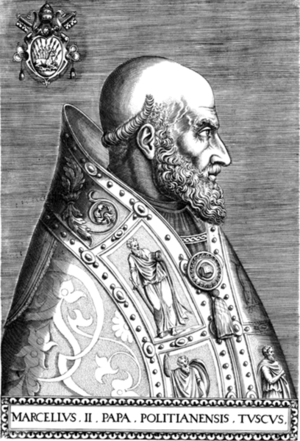 Paula J
Thanks for your management of this profile. We would like to correct the last name at birth to Cervini. Here is our source
posted Jul 13, 2018 by Paula J