Singer. Called the "Peruvian Songbird" and the "Nightingale of the Andes", she achieved large popularity during the 1950s while deliberately shrouding herself in mystery. Born Zoila Augusta Emperatriz Chavarri del Castillo at Ichocán, Peru, little is known of her early life and while she openly proclaimed herself a Peruvian Royal Princess urban legend held that she was a Brooklyn housewife named Amy Camus. Starting to sing at around nine she first appeared professionally in Argentina in 1943 and recorded an album of Peruvian folk songs. Arriving in New York City in 1946 she sang in clubs, appeared in the 1951 Broadway musical "Flahooley", cut a best-selling album entitled "Voice of the Xtabay", and used her four-and-a-half octave range and self cultivated sense of the exotic to build a major cult following . Yma appeared in two movies, "Secret of the Incas" (1954) and "Omar Khayyam" (1957); thru the 1950s she played Carnegie Hall, the Hollywood Bowl, and the Royal Albert Hall, and made $25,000 per week in Las Vegas while releasing several recordings. She essentially retired in the 1970s, telling everybody she had gone back to Peru though she remained in Southern California the entire time. Yma staged a limited comeback in 1984, continued singing until 1997, and died of the effects of advanced age. At her death most of her recorded legacy remained available.

Voice of the Xtabay is the first studio album by Yma Sumac. It was released in 1950 by Capitol Records. It was produced and composed by Les Baxter, along with Moisés Vivanco and John Rose. Sumac sings on the album, accompanied by ethnic percussion and musical variations influenced by the music of Peru.

Is Yma your relative? Please don't go away!

ask our community of genealogists a question.
Sponsored Search by Ancestry.com
DNA
No known carriers of Yma's ancestors' DNA have taken a DNA test. 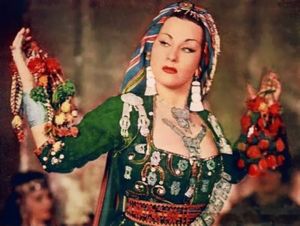 Voice of the Xtabay 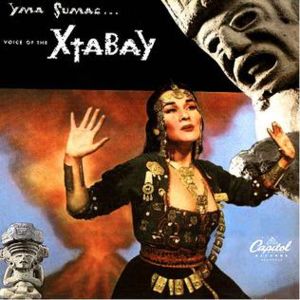