This profile is part of the Chadwell Name Study.

David Chadwell made application for Bounty Land due him under the Act of March 18, 1855. He was age 64 at the time and a resident of Fannin Co., Texas. He was a private in the company commanded by Capt. Thomas Miller, in the Regiment of Tennessee Volunteers, under the command of General Gains on the frontier of Texas in the year 1836. [2] David Chadwell is the 3rd great-grandfather of Laura Welch Bush. [3]

In Rockingham. North Carolina he married Jane (Jincy) Johnson 1795-1885 She was the daughter of Mary Baker deGraffinried and Gideon Johnson. In Fannin County, Texas, May 10, 1855, David Chadwell made application for Bounty Land due him under the Act of March 18, 1855. He was age 64 at the time and a resident of Fannin Co., Texas. He was a private in the company commanded by Capt. Thomas Miller, in the Regiment of Tennessee Volunteers, under the command of General Gains on the frontier of Texas in the year 1836. [4] David Chadwell is the 3rd great-grandfather of Laura Welch Bush.

Mordecai Hoard of Henry County, Virginia, came to Powell Valley in Lee County, with Captain Joseph Martin in 1775 and took up a 400 acre tract of land in the Martin grant of 1769. He also took up another tract of 860 acres. Hoard returned to Henry County where he died. Captain David Chadwell, also a native of Henry County, bought from the heirs of Hoard the 400 acre tract and 707 acres of the other tract. Deeds for these tracts being dated November, 1791, however, David Chadwell was in the area as early as May, 1790, and immediately upon coming here he built a Station or Fort, which was widely known as "Chadwell's Station." The station was a stop over for people traveling westward over the Wilderness Road, as well as being a refuge from Indian attacks for Chadwell and his neighbors. Whether this was a stockaded fort or just a fort house is not known. There is today a church in this area called Chadwell's Station Church.

Aft'er settlement David Chadwell began acquiring other lands and by 1801 he was assessed with 1800 acres of land in Lee County. He continued to acquire land in both Lee County, and adjoining Claiborne County, Tennessee, and finally moved to Tazewell, the county seat of Claiborne County, leaving his Lee County lands in the hands of his children. He died at Tazewell, in 1832, at the age of 100, having been born in 1732, and is buried there at Breastwork Hill.

David Chadwell Sr married Elizabeth Turner and their children were:

We know that David Chadwell Sr, who was a Captain in the Revolution, was in the area of his station as early as May, 1790, for on that day he was granted permission to establish a grist mill on his property. David Chadwell had a sister, Jemima, who married William Cox and settled also in Lee County, Virginia. This could possibly have been the Mrs. Cox shot at by the Indians, on march 17, 1785, mentioned in letters to the Governor of Virginia from both Captain Joseph Martin and Colonel Arthur Campbell.[5]

Name:David Chadwell
Birth:22 Dec 1790
Death:03 Jan 1872
Burial:Porter / Porter's Chapel Cemetery
Fannin Co. TX, USA
Inscription: Age 82
Notes: Stone with Jane.
Biographical information on the Chadwell family can be found on page 140 of Fannin County Folks and Facts, which states that he and his son John Johnson Chadwell emigrated from Marshall Co., Tennessee to settle north of the present site of Trenton in 1855, and was married to Jancy June Johnson. TXFannin GenWeb #: 021522 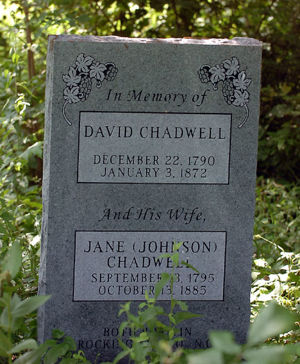 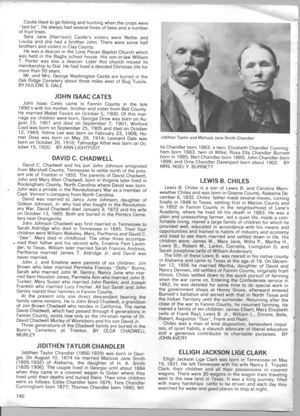 Leave a message for others who see this profile.
There are no comments yet.
Login to post a comment.
Gay (Leonard) Brown
Your Chadwell & my Chadwell's are different. My David Chadwell was the son of John Chadwell 1702 & Barthena Harding 1706. They had 16 children. 5 that I know of spelled their last name with a "K". The Grand father was Felix Kadwell & Abigail Nicholls. My David Chadwell Married Elizabeth Ann Turner & had abt. 8 children. My family comes from William-1779. He was my Maternal, 4xGreat grand father. William married Catherine Lane-1795, in 1808. Their son Alexander-1830, had a son, William A. who was my great grandfather. Always check your dates & places. If it doesn't "feel" right--check some more.
posted Feb 17, 2018 by Gay (Leonard) Brown

Kay (Johnson) Wilson
David Douglass, You and Linda Sibley are 5th cousins. If your relationship is further back than 3rd cousin, this one DNA match isn't sufficient to support marking any relationships 'confirmed with DNA'. It requires triangulation. See this page: https://www.wikitree.com/wiki/DNA_Confirmation

David Douglass
Ive reviewed a couple of sources I would consider pretty reliable and it appears that Mary Allen is the correct spouse of John and correct mother of David Chadwell.

http://www.wargs.com/political/welch.html im going to go ahead with the merge

David Douglass
Phillip you have as David's mother Mary Allen, spouse of John Chadwell. I have Mary's sister, Elizabeth Allen as his mother, spouse of John Chadwell. In my line Mary Allen married abt 1780 in Virginia a James Hartless b abt 1758. Im not sure my information is correct so I am looking further into it before we merge the two profiles.
posted Jul 14, 2015 by David Douglass