Joshua Lawrence Chamberlain was a Mainer.

Born Lawrence Joshua Chamberlain, he transposed his given and middle name and went by Joshua Lawrence.[1]

Military service Lion of the Round Top

Chamberlain left the army soon after the war ended, going back to his home state of Maine. He was elected and served as Governor of Maine for [four] one-year terms. After leaving political office, he returned to Bowdoin College. In 1871, he was appointed 6th president of Bowdoin and remained in that position until 1883, when he was forced to resign due to ill health from his war wounds. He also served as an ex-officio trustee of nearby Bates College from 1867 to 1871.

In January 1880, there was a dispute about who was the newly elected governor of Maine, and the Maine State House was occupied by a band of armed men. The outgoing governor, Alonzo Garcelon, summoned Chamberlain, the commander of the Maine Militia, to take charge. Chamberlain sent home the armed men, and arranged for the Augusta police to keep control. He stayed in the State House most of the twelve-day period until the Maine Supreme Judicial Court's decision on the election results was known. During this time, there were threats of assassination and kidnapping, and on one occasion he went outside to face down a crowd of 25-30 men intending to kill him, and both sides offered bribes to make him a United States senator. He was disappointed at not being appointed to the Congress, but political intrigues prevented his being sent to Washington.

Chamberlain served as Surveyor of the Port of Portland, Maine, a federal appointment, and engaged in business activities, including real estate dealings in Florida and a college of art in New York, as well as hotels and railroads. He also wrote several books about Maine, education, and his Civil War memoir, The Passing of the Armies.

From the time of his serious wound in 1864 until his death, he was forced to wear an early form of a catheter with a bag and underwent six operations to try to correct the original wound and stop the fevers and infections that plagued him, without success. In 1893, 30 years after the battle that made the 20th Maine famous, Chamberlain was awarded the Medal of Honor for his actions at Gettysburg. The citation commends him for his "Daring heroism and great tenacity in holding his position on the Little Round Top against repeated assaults, and carrying the advance position on the Great Round Top."

Beginning with his first election as governor of Maine, continuing to the end of his life, even as he suffered continual pain and discomfort from his wounds of 1864, Chamberlain was active in the Grand Army of the Republic and made many return visits to Gettysburg, giving speeches at soldiers' reunions.

I 1898 at the age of 70, still in pain from his wounds, he volunteered for duty as an officer in the Spanish-American War. Rejected for duty, he called it one of the major disappointments of his life. As in many other Civil War actions, controversy arose when one of his subordinate officers stated that Chamberlain never actually ordered a charge at Gettysburg. The claim never seriously affected Chamberlain's fame or notoriety, however. In May 1913, he made his last known visit to Gettysburg while involved in planning the 50th anniversary reunion. Due to deteriorating health, he was unable to attend the reunion two months later. Chamberlain became a founding member of the Maine Institution for the Blind, in Portland, now called The Iris Network. Chamberlain's wife herself was visually impaired, and he served on the first Board of Directors for the Agency. Chamberlain died of his lingering wartime wounds in 1914 at Portland, Maine, age 85, and is buried in Pine Grove Cemetery in Brunswick, Maine. Beside him as he died was Dr. Abner Shaw of Portland, one of the two surgeons who had operated on him in Petersburg 50 years previously. He was the last Civil War veteran to die as a result of wounds from the war. A full study of his medical history strongly suggests that it was complications from the wound suffered at Petersburg that resulted in his death. His home, located across Maine Street from the Bowdoin College campus, is now a museum owned by the Pejepscot Historical Society, which also maintains an extensive research collection on Chamberlain. Memorabilia on display include the minié ball that almost ended his life and Don Troiani's original painting of the charge at Little Round Top.

The President of the United States of America, in the name of Congress, takes pleasure in presenting the Medal of Honor to Colonel Joshua Lawrence Chamberlain, United States Army, for extraordinary heroism on 2 July 1863, while serving with 20th Maine Infantry, in action at Gettysburg, Pennsylvania, for daring heroism and great tenacity in holding his position on the Little Round Top against repeated assaults, and carrying the advance position on the Great Round Top.

Is Joshua Lawrence your ancestor? Please don't go away!

ask our community of genealogists a question.
Sponsored Search by Ancestry.com
DNA
No known carriers of Joshua Lawrence's DNA have taken a DNA test. 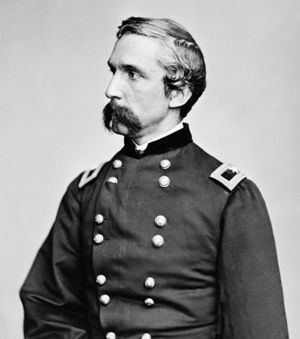 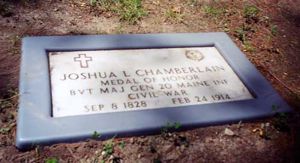 wrote his historic book "The Passing of the Armies: An Account of the Final Campaign of the Army of the Potomac, Based Upon Personal Reminiscences of the Fifth Army Corps," (New York: G. P. Putnam's Sons, 1915) Reprint Bantan Books, 1993, an excellent book for Civil War readers. It is an autobiographical account of his war experiences the latter half of the war which culminates at the war's end at Appomattox where Chamberlain personally was given the honor of accepting the CSA surrender. It is a MUST READ about this historic man and the horrific events of the Civil War.