Henry Champion was born in England in about 1610 (year of birth based on his age at death). He emigrated to New England by 1647, when he was recorded in Saybrook, Connecticut.[1] Some Internet genealogies indicate that he was born in Saybrook in 1610 or 1611, and may claim that this date comes from Ancestry.com's "U.S. and International Marriage Records, 1560-1900," ,[2] but this is a misinterpretation of that source (the source does not indicate Henry's birthplace) and it is impossible; Europeans did not settle at Saybrook until 1636.

The gravestone inscription gives the age at death as 97 and the year of death as 1708. [3]

After his first wife's death, Henry was married to Deborah (Palmer) Jones, widow of Lewis Jones. They were married on 21 March 1697/8 in Lyme, New London, Connecticut. [5][6] Henry Champion died at Lyme, Connecticut, on 17 February 1708/9, "in his 97th year."[7] The couple had a prenuptial agreement. It provided that "whatever estate Deborah Jones shall carry with her to Henry Champean's habitation shall remain her own," would not become part of his estate, and would be distributed to her children from her first marriage after her death. Additionally, it stated that Henry would not dispose of any of his real estate by gift or sale without his wife's permission and that Deborah would be entitled to the widow's share of Henry's estate after his death. Henry was older than Deborah by about three decades, and a passage in The Champion Genealogy indicates that Henry Champion's descendants believed that Deborah took advantage of him through this prenuptial agreement:

"[Henry Champion's] second wife was a shrewd, scheming woman, for she induced this old man to make a very advantageous marriage settlement upon her, and finally involved him in a law suit with the widow of his eldest son, who resisted the resumption of the gifts her father-in-law had made her husband, and maintained in a very spirited manner the rights of herself and children."[8]

Children of Henry and Sarah

Henry Champion was in Saybrook, Connecticut, as early as 1647[5], thirteen years before the first town records of that place are dated. He participated in the hardships of early pioneer life, those hardships being shared by his first wife Sarah, to whom he was married in August, 1647, by the Reverend Mr. Sylvester Nash, of Saybrook.[6]. Later, when a portion of Saybrook was laid out and incorporated as Lyme, they were residents of the new town, and shared in its building and development -- "a first and most active founder."[7] He owned considerable land both in Saybrook and Lyme, in which latter place he had his "ear mark," 1674. There his house was built on the hill just east of the old meeting house, and near the old burying-ground.[8] The lands of Henry Champion are recorded as follows: “One parsell lying on the East side of the Great River Con. Whereon a house now standeth containing by estimation six ackers, the ends abutting against the highway North East and South West, the sides abutting against the land of Morgayn Bowers South East and the land of Joseph Jarrit North West.” [9] Also: “one parsell in the planting fielde on the East side of the great River Con. By estimation four ackers, the end abuts against Blacke Halle River N. East, and against the greate Marsh South West, the side abuts againstthe Land of Will. Bechous North West.”[10] He was made a freeman of Lyme, on the 12 May 1670. After having assisted in the development of Saybrook, Henry Champion removed with his family to the east side of the Connecticut River and became one of the first and most active founders of Lyme, being propounded a freeman of that town on May 12th, 1670. In 1671 he was involved in a land dispute between the towns of Lyme and New London. The dispute was with Renald Marvin and subsequently settled by an agreement dated 8 Sep. 1696.[11] In 1688 he paid taxes under Andros.[12] After the death of his first wife, he married, 21 March 1698, Deborah JONES, who drove a rather hard pre-nuptial bargain with him, of financial advantage to herself. He died in Lyme, 17 February 1708,"aged 98 years." She married again, 26 December 1709, Captain Henry Crane. He was born about 1635 and had married (1) about 1663, Concurrence, daughter of John MEIGS, of Killingworth, Connecticut, who had died there 9 October 1708.[13] Captain Crane died 22 April 1711, and Deborah TOWNER, ancestor of Emma Hale.[14] CHILDREN Sarah, born 1649; married 29 December 1673 "recorded 27 January 1673, by Leftenant Pratt", Henry Bennett, of Lyme. He died 17 January 1726, and she 31 March 1727. One of their eight children was Love, born 19 March 1685, who married John MACK of Lyme.[19] MARY, born 1651; married Aaron HUNTLEY. Stephen, born 1653; died "the beginning of May," 1660. Henry, born 1654; died "the middle of July 1704," He married 1 April 1684, Susanna, daughter of Balthazar and Alice DeWOLFE, of Lyme. They were the parents of five sons and four daughters.[20] After his death Susanna married (2) John HUNTLEY, senior of Lyme. Thomas, born April 1656; died 5 April 1705; married 23 August 1682, Hannah, daughter of Wolston and Hannah (Briggs) Brockway, of Lyme. They were the parents of five daughters and two sons[21], andancestors of several military men of distinction by the name of Champion, and of General Stephen DeWolfe, as well. Hannah Brockway was born 14 September 1664. After the death of Thomas, she married (2), as his second wife, John Wade, of Lyme, and died 2 March 1750.[22] Rachel, born about 1658; married John Tanner. FOOTNOTES 1. Directory Ancestral Heads of New England families, Holmes, xlv. 2. Champion Genealogy, Francis Bacon Trowbridge, 3. 3. Ibid. 5 4. Huguenot Refugees, Samuel Smiles, 407. 5. Champion Genealogy, 15 6. "Records of Saybrook," New England Historical and Genealogical Register 4:22. 7. New England Genealogies, Cutter, 4:1604 - 5; "First Settlers of Lyme," in History of New London, Calkins, 175. 8. New England Genealogies, Cutter, 4:1604/5. 9. Say. Rec. p. 10 10. Ibid 11. Lyme Town Rec. Book II, p. 130 & Genealogy of the Puritans, Hinman, 520. 12, New England Historical and Genealogical Register 34:373 - 6. 13. Boston Transcript, 8 January 1923. 14. Crane Genealogy, Ellen B. Crane; History of Ancient Woodbury, Cothren, 2:1484; Genealogy of the Towner Family, James W. Towner. 15. Ibid. 523 16. Mack Genealogy, Martin, 2:1408 17. Champion Genealogy, 37 18. Connecticut Genealogy 1:137 19. Mack Genealogy, Martin, 1:25; 2:1353.) 20. New England Historical and Genealogical Register 23:428. 21. Ibid. 23:428 22. Champion Genealogy, 37.

ask our community of genealogists a question.
Sponsored Search by Ancestry.com
DNA Connections
It may be possible to confirm family relationships with Henry by comparing test results with other carriers of his Y-chromosome or his mother's mitochondrial DNA. However, there are no known yDNA or mtDNA test-takers in his direct paternal or maternal line. It is likely that these autosomal DNA test-takers will share DNA with Henry:

Images: 1
Gravestones for father and son, both named Henry Champion 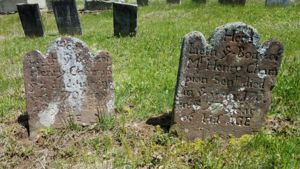