Geoffrey Chaucer was born circa 1343, the son of John Chaucer[1], citizen and vintner of London and of Agnes, daughter of John Copton of London.[2]

Geoffrey was married before September 1366 to Philippa, the daughter of Sir Paon de Roet of Hainault, Guienne King-of-arms.[1] They had two sons including Thomas, and one daughter.[3]

Geoffrey began his career as a page in the household of Elizabeth, Countess of Ulster, wife of Edward III's son Lionel, Duke of Clarence.[1] As a squire serving in Edward III's army when the king invaded France in 1359, he was captured at the siege of Rheims, and subsequently ransomed. A few years later, he married Phillipa de Roet, a lady-in-waiting to Constance of Castile, the second wife of John of Gaunt, Duke of Lancaster. It was to commemorate John Gaunt's first wife, Blanche, that Chaucer composed in 1368 "The Book of the Duchess," the earliest work that can confidently be attributed to him.

Geoffrey served in various campaigns in France and Spain and twice visited Italy as a negotiator on important diplomatic missions. [1] By the age of 31, he had been appointed Controller of Customs and Subsidy of Wools, Skins, and Hides in the port of London, a very responsible post which he held for twelve years. During this period, he found time to write such major and innovatory works as "The House of Fame," "The Parliment of Fowls" and "Troilus and Cressida."

In 1386, he became a Justice of the Peace and Knight of the Shire to represent Kent in Parliament. Soon afterward, his wife died and he devoted the rest of his life to composing the "Canterbury Tales," a project that was never completed.

Chaucer died sometime in 1400 and was buried in in Poet's Corner at Westminster Abbey.[4][2]

Sponsored Search by Ancestry.com
DNA
No known carriers of Geoffrey's DNA have taken a DNA test. 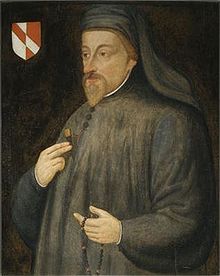 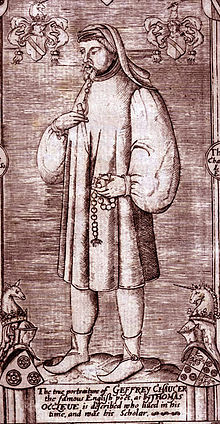 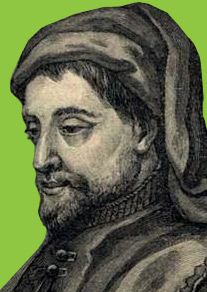 Geoffrey is 19 degrees from Cecil B. DeMille, 27 degrees from Rosalie Neve and 6 degrees from Henry VIII of England on our single family tree. Login to find your connection.