When Kalpana Chawla emigrated to the United States from India in the 1980s, she wanted to design aircraft. The space program was the furthest thing from her mind.

"That would be too far-fetched," the 41-year-old engineer said in an interview earlier this year. But "one thing led to another" and she was chosen as an astronaut in 1994 after working at NASA's Ames Research Center and Overset Methods Inc. in Northern California.

Chawla was the first India native to fly on a space shuttle but the second in space, after Rakesh Sharma, who flew on an Indo-Soviet mission in 1984.

She was a hero in her native country, which has launched satellites for years and is preparing for a moon orbit this decade. One Indian news agency even tracked Columbia's flight so it could tell readers the exact minute they could wave to the skies to hail their countrywoman.

In a 1998 interview with India Today, Chawla said she never thought about being "the first or second someone" in space. "When you look at the stars and the galaxy, you feel that you are not just from any particular piece of land, but from the solar system."

Chawla enjoyed flying aerobatics and tail-wheel airplanes. She told reporters before the Columbia flight that J.R.D. Tata, who flew the first mail flights in India, captivated her imagination and prompted her to take up aeronautics as a career.

On her only other spaceflight, in 1997, she made mistakes that sent a science satellite tumbling out of control. Other astronauts had to go on a spacewalk to capture it. NASA later acknowledged that the instructions to the crew may not have been clear.

"I stopped thinking about it after trying to figure out what are the lessons learned, and there are so many," she said. "After I had basically sorted that out, I figured it's time to really look at the future and not at the past."[4]

Is Kalpana your relative? Please don't go away!

ask our community of genealogists a question.
Sponsored Search by Ancestry.com
DNA
No known carriers of Kalpana's ancestors' DNA have taken a DNA test. 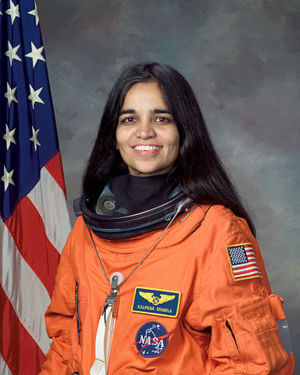