Chopin was a famous Polish pianist and composer of the Romantic period.

Chopin himself wrote a letter 16 Jan 1833 to the chairman of the Société historique et littéraire polonaise (Polish Literary Society) stating that he was born 1 March 1810 at the village of Żelazowa Wola in the Province of Mazowsze,[2] in what was the Duchy of Warsaw at the time of his birth.

The birthdate 1 March 1810, has become the generally accepted date of his birth[4]

Nicholas' father was a tutor, teacher, professor. His mother was "particularly tenderhearted and rich in all the truly womanly virtues ... for her quietness and homeliness were the greatest virtues."[5] We can assume that Chopin was given more than adequate early learning and a warm and loving home.[3]

He had three sisters, Louisa, Isabella and Emilia. Louisa and Isabella wrote together for the improvement of the working class. Emilia, who died at age 14 and Isabella translated the tales of the German author Salzmann.[3]

Chopin never married, nor did he have children. He became engaged in 1836 to Maria Wodzińska. Her portrait of him is considered one of the better likenesses. Maria's mother Countess Wodzińska approved the marriage at first, but later 1637 changed her mind.[4] There is a second version of the story, in which he asks, but she rejects him because her parents would not approve.[6]

It was shortly after this that he began a long term relationship with Amantine-Lucile-Aurore Dupin, French novelist, better known by her pseudonym George Sand.

At a young age Chopin and his sister received musical instruction on the pianoforte by Adalbert Zywny, who was a very successful instructor and also a composer. Chopin's talents were recognized when he was young. At eight he was playing for company and by nine was invited to take part in a concert for the benefit of the poor. His successful debut took place 24 Feb 1818, and he became the "pet" of the aristocracy of Warsaw.[3]

Chopin began composing almost as soon as he began playing. His father hired Joseph Elsner to teach him harmony and counterpoint and composition.[3]

At the age of fifteen, in 1824, he entered the Warsaw Lyceum , distinguishing himself and being twice awarded a prize.

Frédéric Chopin taught. He played the piano preferring small venues to large concerts. He composed and published more than 230 works. His music speaks for itself.

Wikipedia:List of compositions by Frédéric Chopin by genre

Frédéric Chopin died 17 Oct 1849 in Paris, France. He was buried at Père Lachaise Cemetery after an elaborate funeral at the Church of the Madeleine. The following obituaries appeared in American newspapers:

"A loss to the musical profession.--The celebrated pianist, Frederic Chopin, whose name is familiar to the musical world, recently died in Paris after an illness, more or less severe, of 20 years. Chopin was not only one of the three or four illustrious pianists of his day, but also a composer of the style peculiarly his own, which united the elegant grace, the plaintive revery, and sustained style of the old school with the high degree of passionate poetry which marks the modern. His feeble health had long since forbade Is performing in public, where his talent so exquisitely delicate would have shown less than in private when he could give himself up at ease to the inspirations of fancy. In the decease of this pianist, a profession deplores an eminent artist, a noble heart an exalted mind."[7]

"Death of Chopin, The Pianist.--The French papers announce this event as having happened on the 17th instant. Mr. Frederick Chopin died of a disease of the chest, at the comparatively early age of thirty-nine."[8]

Chopin's death certificate said he died of tuberculosis and although it has been speculated that he perhaps died of other causes, tuberculosis has not been disproven. After his death, his heart had been removed and entombed at Holy Cross Church in Warsaw. It has been recently examined, but not tested.[9] 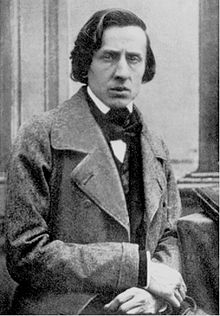 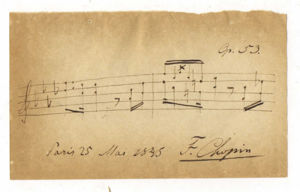 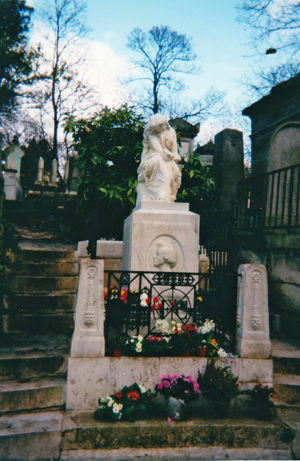 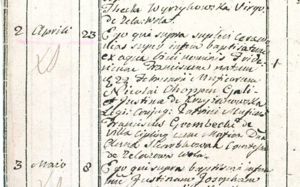 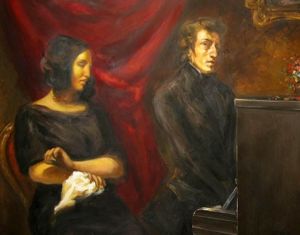 Frédéric is 36 degrees from Jaki Erdoes, 24 degrees from Wallis Windsor and 29 degrees from Henry VIII of England on our single family tree. Login to find your connection.