John "1st Duke of Marlborough" Churchill
Born before 26 May 1650 in Ash, Shropshire, England

John Churchill was a member of the aristocracy in British Isles.

John Churchill, was baptised on the 6 June 1650 at Devon, England.
He was the son of Sir Winston Churchill and Elizabeth Drake.

In 1678, John Churchill married Sarah Jenyns (better known as Jennings) who had long been a favorite of Princess Anne. They lived at Henbury, Dorset, England and had 7 children.

John Churchill, who later became the 1st Duke of Marlborough, was educated at St Paul's School in London.
In 1667 he held the office of Page of Honour to James, Duke of York. That same year he obtained a commission in Foot Guards.
He fought in Tangiers between 1668 and 1671 and in Flanders from 1672 to 1673 under the Duke of Monmouth.
In 1673, he held the office of Gentleman of the Bedchamber to James, Duke of York.

In 1679, he became Master of the Wardrobe. That same year he sat as Member of Parliament for Newtown, on the Isle of Wight.
He was created 1st Lord Churchill of Eyemouth in 1682. The following year, he gained the rank of colonel of King's Own Royal Regiment of Dragoons. He held the office of Ambassador to France from March 1685 to April 1685. He was created 1st Baron Churchill in May 1684.

In July 1683, he escorted Prince George of Denmark to England for his marriage to Princess Anne. With the ascension of James II to the throne in 1685, he was dispatched to put down a rebellion led by the Duke of Monmouth whom he defeated at Sedgemoor.
In November 1688, John Churchill openly encouraged his officers to join him in support of the King's Protestant daughter and son-in-law, defected to William and Mary on November 23 precipitating James II's flight to France.

Under the new regime, he held the office of Gentleman of the Bedchamber from 1689 to 1692 and was invested as a Privy Counselor in February 1689. He was created 1st Earl of Marlborough in April 1689.

As a result, in 1692 he was dismissed from most of his posts, for suspicion of intrigues with James II. He was recalled in 1698, his military ranks restored.

At the outbreak of the War of the Spanish Succession in 1701, the King sent John Churchill to The Hague to negotiate the Treaty of the Second Grand Alliance against France. With Queen Anne's ascension to the Throne the following year, he gained the rank of Captain General, as well as General of the Allied Forces.

He also held the office of Ambassador to The Hague and was invested as a Knight, Order of the Garter. He was created 1st Marquess of Blandford and 1st Duke of Marlborough.

He was responsible for the devastating defeat of the French at Blenheim in 1704, in reward for which Queen Anne bestowed upon him the Manor of Woodstock, where he subsequently built Blenheim Palace. He was created Prince John of the Holy Roman Empire in August 1704, by Emperor Leopold.

By 1708, his wife's friendship with the queen was on the wane and with the collapse of the friendship three years later, he was recalled from the field and in December 1711, he was dismissed from most of his offices.

In disgrace, the Marlboroughs left England for the Continent, returning only upon the death of the Queen three years later. Under George I, he was restored to his position as Captain-General, and became an influential figure at court.

He suffered several strokes in 1716 and upon recovering he spent his time supervising the construction of Blenheim Palace at Woodstock. Shortly before his seventy-second birthday, he suffered another stroke and died at Cranbourne Lodge, Windsor. (bio by: Iola) 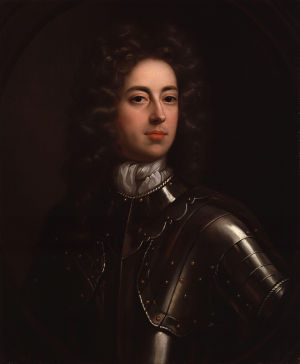 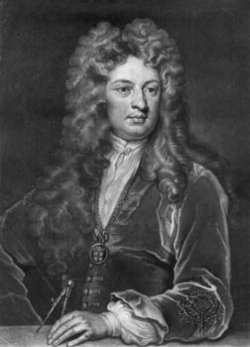 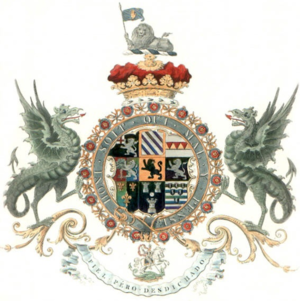 Tomb in Blenheim Castle of the Duke and Duchess of Marlborough 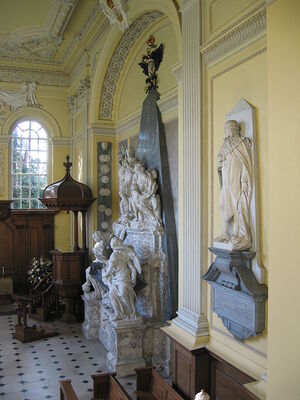 Categories: Namesakes US Counties | Prisoners of the Tower of London | Battle of Sedgemoor | Dukes of Marlborough | Governors of the Hudson's Bay Company | Notables