Marigold was born four days after the end of World War One, on 15 November 1918. She was the third daughter of Winston Churchill and Clementine Hozier.

Marigold died of fever, not yet three years old. [1] Her death greatly affected her parents.

Her sister, Mary Soames, was later to say; “Mummy had left her in the charge of a French nursery governess, Mademoiselle Rose, while she went to stay with the Duke and Duchess of Westminster at their home in Cheshire. Marigold, who was known as “Duckadilly” in the family, developed a very sore throat but, even when she became really ill, the governess still waited a day or two before sending for my mother. By that time, there was nothing even a specialist could do for her." ( See "An Interview with Mary Soames" at www.winstonchurchill.org) Other accounts show that her parents hurried back home and were with Marigold when she died. Biographies and television dramatisations of the lives of the Churchills do not omit this tragedy, as Winston Churchill, despite his responsibilities, was known to be a family man.

Mary went on to say how this affected the family: “Mummy didn’t blame the governess in any way but, of course, the whole thing shook her deeply. It wasn’t only grief and loss. She knew she was going to have to be away a lot because of Father’s involvement in politics. So she decided she had to have someone of more stature to look after the remaining children—Diana, who was 12; Randolph, who was 10; and Sarah, who was almost eight.

“She asked her first cousin, Madeline Whyte, an impoverished gentlewoman who’d trained as a Norland nurse, to take over. Nana, as we called her, was in charge when I was born, and she dominated my whole life when I was a child.”

Although originally buried at Kensal Green Cemetery, in 2019 the Churchill family acted on a long held desire to reunite Marigold's remains with the rest of her family in Bladon churchyard. The empty grave and listed monument created by Eric Gill will remain at Kensal Green. [2]

Is Marigold your ancestor? Please don't go away!

ask our community of genealogists a question.
Sponsored Search by Ancestry.com
DNA
No known carriers of Marigold's ancestors' DNA have taken a DNA test. 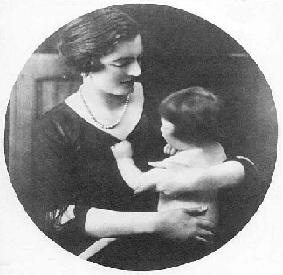